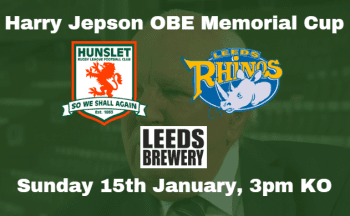 James Coyle has made a number of changes as he rotates his squad. Captain George Flanagan misses out. Jack Lee returns after missing last weeks game against Featherstone Rovers, and there is a first run out for Gavin Duffy, Brett Whitehead and Marcus Webb.

Joe Sanderson, Jack Norfolk and Nyle Flynn line up against their former club for the first time after moving across the city from the Rhinos.

Hunslet will be looking to get off to a flyer in James Coyle’s first home game in charge. Admission is £15 Adults, £10 Concessions and £5 for Under 16’s, kick off is 3pm and the Phoenix bar will be open from 12pm.