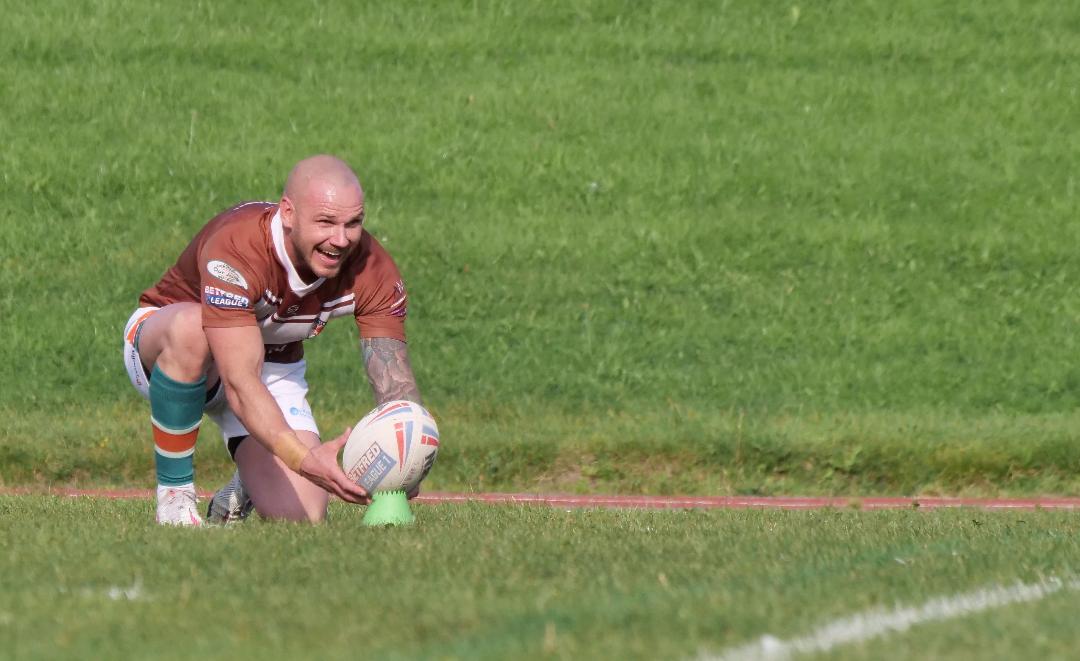 “And So We Shall Again” is the closing phrase of Hunslet Rugby League club’s famous war song “We’ve Swept the Seas Before Boys.” Sadly, there will be no “We Shall Again” for the Parksiders’ veteran scrum-half Dom Brambani.

Brambani has confirmed a decision he made privately to himself early in the 2021 season to retire. But he can do so with his head held high, having shown superb form in the closing weeks of the campaign, with his pin-point kicking game leading, in particular, to memorable tries for wingers Reece Chapman-Smith and Wayne Reittie.

He said: “I must admit the last few matches have gone well for me personally, but I’d already made my mind up. My body’s been calling me for a while now and I can’t really carry on at this level. It takes me until Thursday, after games, to recover and get back to normal!

Hunslet had something of a roller-coaster season in 2021, with Gary Thornton being replaced as head coach in July by Alan Kilshaw, who steered the Parksiders to the Betfred League 1 promotion play-offs. Brambani stressed: “My decision predated Gary Thornton’s sacking – although that didn’t exactly help – and then I got Covid which ruled me out for a while this year and which knocked me for six.

“Alan Kilshaw, to be fair to him, has been great. He kept in close contact with me throughout my self-isolation and helped be through a difficult period. But it’s time for me to call the curtain on professional Rugby League. I worried about doing another pre-season of training three nights a week, with the real possibility (bearing in mind that I’ve increasingly been picking up niggles after games) that after signing a contract I might well have subsequently been sidelined from matches. That certainly wouldn’t have been fair on Hunslet.

“It was a strange feeling at the end of the game against Doncaster in our elimination semi-final. I went into the match aiming to win, not contemplating defeat, and when the final hooter went the reality dawned on me that this was actually my last professional Rugby League game!”

Brambani has plenty of career successes to reflect on, however. Beginning at Castleford Tigers, he went on to serve Halifax, Sheffield Eagles, Dewsbury Rams and Batley Bulldogs with distinction before joining Hunslet in 2019.

A real career highlight was when unfancied Sheffield beat Featherstone Rovers 20-16 in the 2012 Championship Grand Final (“that was massive!” he reflects) while perhaps his best memory with the Parksiders is a recent one – the impressive 32-14 league victory at Workington Town in early September, the nature of which suggested that the side had the talent and commitment to secure promotion.

“That was a good win,” he admits. “Not many sides are victorious at Derwent Park, certainly not in that manner.”

But that success was followed, seven days later, by the season-ending (and, for `Brambino’, career-closing) reverse at Doncaster. “It was disappointing,” says the veteran, “in all fairness i think doncaster just had the edge on us on the day and maybe some of the younger players found the pressures of play-off football, which they’d not previously experienced, a bit too much. Playoff football is very different to playing a league game)

“I’d have loved to have gone out on a high by helping Hunslet secure promotion, but it wasn’t to be. My time at the South Leeds Stadium was affected by the coronavirus lockdowns, and then by my self-isolation, and I’d have liked to have done so much more, including achieving Championship status. But I’d like to thank our loyal fans for their support and for sticking with us, and I’d like to thank all my team mates, Gary Thornton – who brought me to the club – `Killer’ and all the back room staff who have looked after me during my time at Hunslet.”