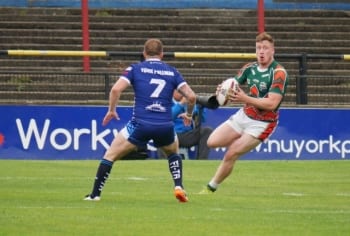 Hunslet Hawks have today agreed a deal with Featherstone Rovers which will see utility back James Duckworth join them on loan for the rest of the season.

James joins Featherstone initially on loan with a view to securing a permanent deal at the Championship Club. With the financial constraints of the club, and with no realistic chance of retaining James for the 2017 season the club has made the reluctant decision to allow James to join Featherstone to try and earn himself a contract for next season.

James has been a great servant to the club since he arrived on dual registration from Leeds Rhinos in 2014. He scored 13 tries in 36 appearances for the club, and played an integral part in our 2014 championship winning season, scoring a vital try in the Grand Final at Headingley.

Kyran Johnson is a 22 year old utility back with electrifying pace who made his debut for Rovers in 2015. Johnson played on the wing last weekend for Featherstone in a close defeat at Leigh Centurions.

Jack Coventry is a 22 year old prop forward who also made his debut for Rovers in 2015. He is 6 foot and weighs 16 stone and will add some size to the Hawks pack as we push towards the play offs.

Also joining the club on a contract until the end of the season is front row forward Jose Kenga, Jose 21 years of age lives in Middleton and joins the club from Dewsbury Rams following a successful trial period at the club.