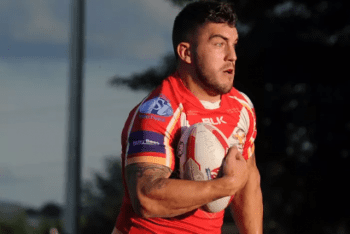 Hunslet RLFC are delighted to announce the signing of back-row forward Duane Straugheir from Sheffield Eagles.

Duane, 28, is a product of the Bradford Bulls academy system and made his professional debut for Featherstone Rovers back in 2010. After a successful spell at York City Knights in 2011, he moved to Sheffield Eagles where he has been a main stay in the Eagles team over the past five years.

Straugheir will end his five-year stay with the Eagles, which includes winning back-to-back Grand Finals when he makes the switch to the South Leeds Stadium. Over that period Duane has won two Grand Finals and has gone on to make over 150 appearances for the Eagles scoring an impressive 43 tries.

Gary Thornton was delighted with the capture of Duane “This is another massive signing for us. Duane will bring a wealth of experience and quality to our club.

“He is an established and well respected Championship player, and has been an integral part of a successful Sheffield Eagles side since 2012.

“This is another demonstration of our intent for 2018. Quality players like Straff don’t come available very often – as soon as we were alerted of his availability, we acted quickly to get him signed.

“He has been loyal to Sheffield for a number of years now, and was a target for other clubs in both the Championship and in League 1, so to get him on board is a huge achievement.

“His leadership qualities and undoubted ability will benefit the younger players in our squad, and I’m sure they’ll look up to him.

“I’m really looking forward to welcoming him to our club and working with him.

“He is a quality individual as well as a quality player, and his enthusiasm for the game and the new challenge ahead at Hunslet really shines through.

“He is a fantastic addition to our new group, and will be a major force in this league.

Duane was equally excited to be making the switch to South Leeds; “I’m really looking forward to a new challenge here at Hunslet.

“I am honoured and grateful for Gary’s persistence on attracting me to this historic club, his ambition and determination to move the club forward is something I am really looking forward to being a part of.

“I see this as a massive opportunity for me to continue my career enjoying every second of it and can ensure that I and the rest of the boys will give 100% throughout the season to get this club back to the Championship where it belongs.”

Don’t forget the deadline is 11pm tonight to make your order 👍🏻 🟢🟠⚪️ 🟤⚪️ ➡️ hunsletrlfc.com/store/Due to the fantastic response to our leisurewear range, we will be making an initial order with Future Sports Gear over the weekend. If you want to be in the first order batch and have your order with you within the next 3-4 weeks then the cut off is 11pm tonight. 👍Order Now ➡ hunsletrlfc.com/store/ ...