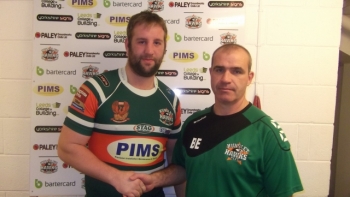 Hunslet Hawks RLFC can today announce that 28 year old prop forward Mark Castle has joined the club on a 1 year contract from Doncaster.

Castle joined Doncaster in 2012 and has been one of their most consistent performers during his 3 year spell at the club. He made 14 appearances in 2014 scoring 3 tries.

Director of Rugby Darren Williams said “Mark has really established himself as a top Championship front row forward and played a major part of Doncaster’s prominent rise into the high echelons of the second tier of the game, he is an aggressive no nonsense forward who will provide some grunt and added steel to our forward pack in 2015 which will be needed.”

Castle added “I’m looking forward to joining a club that will be buzzing from last year’s success and I’m hoping to add to the squad that the club are putting together and can’t wait to get started in November when pre season commences and meeting all the lads.”