Eaton extends contract with the Hawks 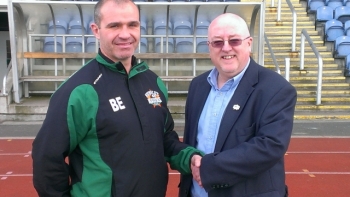 Hunslet Hawks are delighted to announce that head coach Barry Eaton has signed a 2 year extension to his existing contract with the Club. Chairman Neil Hampshire said “We are absolutely thrilled that Barry has agreed to extend his contract with the Hawks. He has bought into the philosophies of a supporter owned Club and has become integral to what we want to achieve here being a key factor in helping to grow the business side as well as putting the Club at the heart of the Community. Barry is without doubt one of the outstanding young coaches in today’s game and has instilled a thoroughly professional approach right across the coaching, playing and back room staff. This new deal is just reward for the outstanding job he has done so far on a very limited budget. It gives both Barry and the Club a stable platform from which to move forward.”

Director of Rugby Darren Williams added “We are delighted to retain the services of Barry for a further two years, he’s highly regarded in the game and our current group of players have certainly bought into his philosophies. Were building solid foundations for the future of this club and Barry is part and parcel of what we want to achieve here.”

On his extension Eaton said “Myself and my family are delighted to be staying on board with Hunslet as the club continues to build both on and off the field. The continued progress will hopefully see Hunslet become a stronger force in Rugby League over the next few years and we are very pleased to be a part of it.”