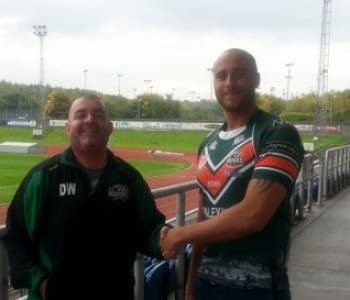 Hunslet Hawks RLFC can today announce that Ayden Faal has returned to the club from Batley Bulldogs signing a 1 year deal for 2016.

Faal 28 previously played for the club before leaving for Dewsbury Rams before joining Batley Bulldogs in 2012.

Director of Rugby Darren Williams said “ Signing Ayden is testimony that we are creating the right environment at the club when players are happy to return, he’s had his injury problems and is just recovering from a shoulder reconstruction but his rehabilitation is ahead of schedule and he’s looking forward to showing us what we all know he can do. He is a major signing for the club as we prepare for life in Championship 1 and he will provide us with some strike out wide.”