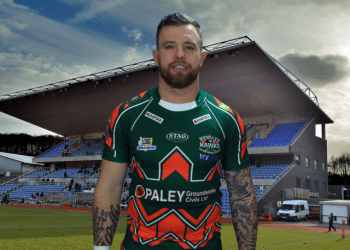 We can push for promotion if we take our cup form into the league, hooker George Flanagan reckons.

Hunslet, who are ninth in Kingstone Press League One, gave a good account of themselves in a 50-14 defeat by Super League outfit Salford Red Devils in the Ladbrokes Challenge Cup two days ago.

Flanagan was Hawks’ man of the match and he believes they have set a standard they need to follow when they return to league action at Oxford on Sunday.

“We spoke during the week about how tough it was going to be against a good Super League team in Salford,” Flanagan said. “We knew they would come all guns blazing, but credit to our boys, I thought we really fronted up and gave it a good go.

“Unfortunately sometimes decisions don’t go your way and they punished us a bit towards the back end, but I thought we dug deep. We knew we had to up our game coming up against the full-time professionals.

“Being a part-time club it is tough, we go to work every day and then we come training on a night time, but I can’t fault any of the lads. I thought they were all absolutely brilliant and we gave a good account of ourselves.”

Coach Matt Bramald wanted his players to make a name for themselves and Flanagan felt they did that. He added: “It is nice to come up against Super League players. You raise your game and test yourself against the best. I was disappointed [with the scoreline], but proud as well with the effort we put in.”

Hawks have won only one of their opening four league games and Flanagan said: “Our league form hasn’t been brilliant.

“Our league performances are important and we have spoken about that. Hopefully we can go to Oxford on Sunday and really kick-on in the league.”

This is Flanagan’s second season at Hunslet following a move from Featherstone Rovers.

“Darren Williams and Matt Bramald do a fantastic job and we’ve got a great bunch of lads here.

“Hopefully we can kick-on in the league and get Hunslet back into the Championship, where they belong.”

Flanagan began his career in Bradford Bulls’ academy and has not totally given up on the prospect of a return to full-time rugby.

“I am 30 this year,” he said. “I’ll never give up on it, but I have a decent job so it would be a big decision, but I am not thinking about that.

“I am just thinking about our league performances and where we can take Hunslet this year.”