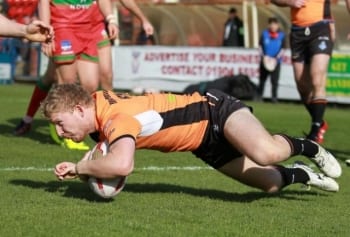 Hunslet RLFC are delighted to announce the signing of former England Academy Half-back Harry Tyson-Wilson from York City Knights on a 12-month deal.

Harry, 20, is the son of former Hunslet and Hull KR back-rower Rob Wilson. He is a product of the Hull FC academy system and made his professional debut for Hull against Huddersfield Giants back in 2014.

After a successful three game loan spell at York City Knights in 2016, the Knights moved quickly to beat off competition from Championship clubs to bring him back permanently to Bootham Crescent.

He went on to make 15 appearances scoring three tries and kicking thirty goals helping the Knights to make the play-off semi-finals in 2017.

Gary Thornton was delighted with the capture of Harry “I’m delighted to have signed Harry for next season. I’ve worked with him before during my time at Doncaster, when he came on dual registration from Hull FC and was always very professional and always willing to learn.

“He is a talented young half back, who was highly rated at Hull FC, and has spent last season with York City Knights, where he will have gained good experience playing in League 1.

“He is tactically aware with a terrific short kicking game, and will add a different dimension to our attacking options.

“Harry is a confident young man who has a big future in the game, and hopefully we can give him the platform to develop and grow as a player.

“We are building a really good blend of youth and experience now in our pivotal positions, and both he and Joe Sanderson will flourish alongside Cain Southernwood in the halves and with Jack Lee and George Flanagan at 9.

“I’m really looking forward to working with Harry again, and hopefully he will be a feature at this club for seasons to come.

Tyson-Wilson commented; “I’m really looking forward to getting stuck into pre-season with the lads and getting to know them.

“I want to play a part in helping the club to kick on in 2017. We are putting a good squad together and I am looking forward to playing my part in making the season a successful one for the club.

“I want to continue to improve my game and have a good season and I think I can do that under the guidance of Gary.”