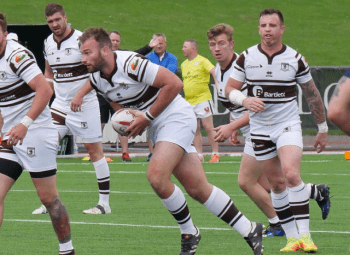 Hunslet RLFC can today announce the re-signing of forward Matt Nicholson on a 12-month contract.

Nicholson 26 is a vastly experienced and well respected front row forward who is a former Leeds Rhinos junior and has also had spells at York City Knights, Featherstone Rovers and most recently Doncaster.

Matt joined the club in June from Doncaster having recovered from a serious injury. He went on to make ten appearances, scoring two tries culminating in the club going on to lift the League 1 Shield.

Gary Thornton worked with Matt at both York and Doncaster, and he was delighted to retain him for the 2018 season; “I’m absolutely delighted to have retained Matt for 2018. He finished the season really strongly after his comeback from the latest knee reconstruction.

“Even though he missed the whole of pre-season and a large chunk of the playing season last year, he had an immediate impact on the team when he came in late in the season.

“I’ve known and coached Matty for a number of seasons now, and he is a valuable member of our playing squad.

“He is a very intelligent player, and will be a huge benefit to us both on and off the field, with the experience he has gained at good clubs like Leeds and Featherstone.

“His go forward and work rate are excellent, and with a good pre-season under his belt, I’m confident when he’s fully fit, he will be even better for us next season.

“He has overcome a lot of serious injuries in his short career, which demonstrates how strong his character is, and I really hope they are all behind him now and he can move forward and show everyone what a quality player he is.

“He’s a great person to have around and is well thought of and respected by his peers and the coaching staff.”

Matt was equally pleased to be staying on at the South Leeds Stadium for a further 12 months; “It was an easy decision to make, Gary has stuck with me during some hard times in my career and I wanted to repay the faith that him and the club have put in me.

“We underachieved as a team last year and the fans stood by us through thick and thin, and with the team that Gary and Darren are assembling for this season there is no reason why we shouldn’t be up challenging for promotion.

“For me personally I’m looking forward to hitting the ground running in pre-season and helping the club get back to where we belong.”