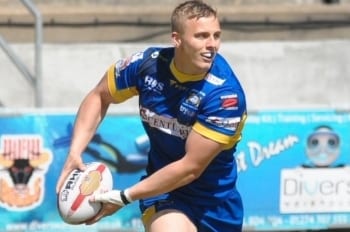 Hunslet RLFC can today announce that our first new signing for 2018 is Brad Foster 22 back row forward from Dewsbury Rams.

Head Coach Gary Thornton said “Brad will be an excellent addition to our squad for 2018.

“He has been brought up in a rugby background and was well schooled in the Castleford Academy before moving to Doncaster, where he more than held his own at Championship level, in his first season out of academy football.

“He had a further year at Doncaster in League 1 before moving to Dewsbury to play alongside his brother Tony Tonks, but a shoulder injury curtailed his season.

“He’s now fully recovered and raring to go. Having coached him before, I know the qualities and attributes he will bring to the team.

“He’s naturally fit as he has a career as a Personal Trainer, and has a great attitude to training and playing.

“He is a tough back rower, and won’t take a backward step, but can defend well on the edge too.

“He had other offers on the table from other clubs, so for him to choose us is a massive bonus.”

Foster added “I really can’t wait to get started with Hunslet; I’ve heard plenty of good things about the club so I’m already looking forward to pre season as well as meeting the lads and the coaching team.

“This season hasn’t been the best for me on a personal level as I haven’t had much game time due to injury so I’m really excited to be signing on at Hunslet and get back out on the playing field to prove to people what I know I can do.

“I’m also looking forward to linking up with Gary Thornton again and hopefully we will get the club back towards the top of the table”.