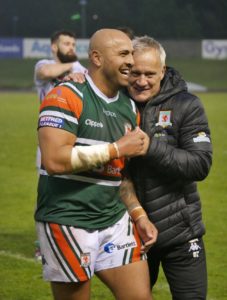 The first of two successive games under the floodlights (Hunslet play Doncaster next Friday at South Leeds) was a must win as the hosts looked to consolidate their position at second in the League 1 table.

Awful weather from kick-off meant that an early Keighley fumble could be pounced on by the hosts, and after only two minutes Hunslet pressure sent Ben Heaton over for a try 4-0.

Keighley had brought a fair number of supporters, and they were hoping for a quick reply. But Hunslet’s defence was solid, and after a fantastic 40/20, defence turned to attack with Nathan Chappell taking advantage of short Keighley numbers on the left to make it 8-0 to the South Leeds men.

Reece Dean was not having success with the conversions, but at full-back was having a massive effect on the game, saving a try from a slippery Cougars kick. He then turned defence into attack sending a lovely ball to Gareth Potts (who had spilt an earlier chance) but this time with good hands scored in the corner 12-0 after 30 minutes.

At 12-0 Keighley were not out of the game and again pressured Hunslet’s line, but that home defence was like a solid green wall all night. The game breakers came though at the end of the half.

The impressive Mike Emmett wrestled his way over from close on 40 minutes, and in added time a beautiful Cain Southernwood ball sent Duane Straugheir through, who with confidence and rounded the full-back to score. Dean converted both tries and Hunslet went into the half time break with their tails up, leading 24-0.

Keighley needed to strike back early on in the second half to have any chance, but Hunslet soon snuffed that out when from a chip kick Ben Heaton pounced to score 28-0.

The elements now started to take their toll with both teams making numerous mistakes, and ball handling becoming difficult. Credit to the hosts who always tried to play open and at times (for the conditions) sparkling rugby.

The Cougars were now becoming frustrated, all their tilts at the Hunslet line being held back by a Hunslet team determined to nil an opponent for the first time since 2014. So much so that a Keighley player was eventually sin-binned as the game became more fractious.

There was still time though, on the 80th minute, for Hunslet to put some icing on the cake when Zac Braham set off on a determined run towards the left corner, no man could have stopped him and with Danny Nicklas converting on the hooter it was a good day for the Parksiders winning by 34-0.

A good all round team performance then, but Man of the Match went to Cain Southernwood who after a loan spell at York has been magnificent in two important victories.

Another big game comes next Friday at home to Doncaster and on this form you would not bet against a Hunslet victory.