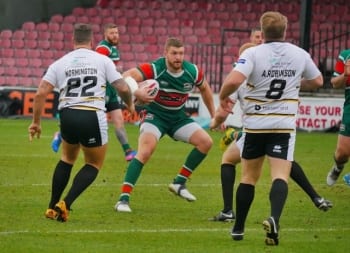 “The scoreline was disappointing, but I was really happy with the effort and commitment, especially for a first hit-out,” Thornton said.

“York had played three times already. It was pretty encouraging, there’s loads to work on, but it was a good platform.

“There were more positives than negatives so I am reasonably happy.”

Hunslet trailed only 6-0 at the break and Thornton added: “The scoreline blew out, in the last five minutes they scored three tries which was disappointing.

“Just execution let us down, but that will come with match practice and more games.”

Hunslet came through with no serious injuries, but Mufaro Mvududu pulled out before the game owing to an ankle problem. David Foggin-Johnston missed the match with a shoulder strain, along with Brad Foster (hamstring), Jack Lee (ill), Nathan Chappell (knee) and Michael Haley (shin).