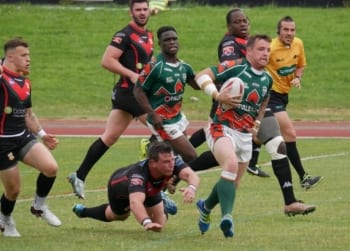 Hunslet Hawks are delighted to announce that star hooker George Flanagan has today signed a new two-year contract with the club.

The deal will mean that George will remain at the South Leeds Stadium until the end of the 2018 season.

George who is sponsored by Active Workwear, originally joined the club from Featherstone Rovers on a one year deal in 2015 after successful spells at Batley and Dewsbury respectively.

George has been a standout player for the Hawks this season, scoring 11 tries in 18 appearances. His introductions from the bench have been explosive, with him helping to change numerous tight games in the favour of the Hawks.

George has made a total of 40 appearances for the club scoring 17 tries.

Director of Rugby Darren Williams said “Retaining George was high on our priority list, he showed some loyalty to the club following relegation last season when he decided to stay, and we are delighted to reward his loyalty with this 2 year deal.

“His enthusiasm for the game and his attitude is second to none.

“He’s a born winner and this season he’s been close to been back to where he was before his serious leg operation in 2014.”