Gibson and Hunslet proud at keeping rivals at bay 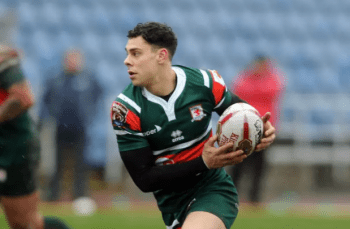 New look Hunslet can be satisfied with their start to the year, but closed-season recruit Joel Gibson reckons they will only get better.

Hunslet were beaten 34-10 by Newcastle Thunder in the League One Cup, but bounced back with a 34-0 Ladbrokes Challenge Cup victory over Coventry Bears before last Sunday’s 10-6 success against University of Gloucestershire All Golds in Kingstone Press League One.

The Parksiders led 10-0, but conceded a try before half-time and there was no further scoring after the break as both teams got bogged down in the mud. It was the lowest-scoring game at South Leeds Stadium since Hunslet’s 10-8 win over Widnes in the 1999 Northern Ford Premiership semi-final and Gibson reflected: “The conditions were dreadful. It didn’t make for a good game of rugby league.

“I think a dry track would have suited both teams a lot better, but we got a win which is what we set out to do and it’s two points on the board.”

Hunslet have leaked just six points in their last two matches and Gibson added: “That’s very pleasing. We pride ourselves on our goalline defence, we do a lot on that in training so to concede one try in two games is massive for us.

“We will build on that now and keep that going.”

Every Gloucestershire mistake was celebrated by Hunslet’s players and Gibson reckons that was an indication of how much pride they are taking in keeping the opposition at bay. “Sometimes, in games like that especially, it’s as good as a try,” he said.

“You don’t want to be pegged on your own goalline so to force them to turn the ball over and keep them out is brilliant – we love that.”

The loss to Newcastle was a blow at the time, but Gibson described it as a “big kick up the backside for us”.

He said: “I think we took that game for granted.

“I think the standings from last year came into it, we finished above them and a lot of people thought it was won before we’d even stepped on to the field.

“It shook us a bit and it has made us work harder. We are building every week.”

He was the National Conference’s top points scorer – with 307 from 32 tries and 89 goals – in 2015, when he also won the Division Three player of the year award. He missed much of last year due to a serious knee injury, but reckons he is now beginning to adapt to League One rugby.

“It took me a couple of weeks longer than I thought it would, with the transition and the extra training, but I love it,” he said.

“It’s where I’ve wanted to be for the last few years.

“To finally get back on the park as a semi-pro, I love it.

“I had a bad injury last year and that kept me out of the game for a while so that was disappointing.

“I was quite lucky to get a chance here so I’ve grabbed that with both hands and hopefully I can repay them for the opportunity.

“I think I’ll get better as the conditions improve, a dry track will suit us a lot better.”