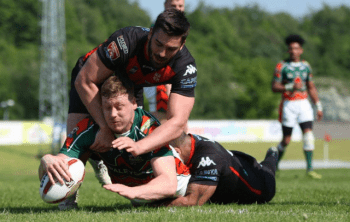 Hunslet RLFC have today signed winger James Duckworth on loan from Featherstone Rovers and hooker Luke Teasedale until the end of the season.

Teasedale also 23 was previously on the books at Featherstone Rovers and is also a product like Duckworth of the Leeds Rhinos youth system, he has recently been playing at Stanningley and his coach at Stanningley is current prop forward Matt Nicholson who has recommended him to the club.

Director of Rugby Darren Williams said “It looks like Tommy Brierley recent loan signing from York City Knights faces a spell on the sidelines with a possible MCL tear sustained in last week’s victory against Newcastle Thunder and he’s awaiting a scan, so Duckworth’s availability came at a good time as we prepare for the League 1 Shield.

Williams added “Teasedale has been a target of the club previously and he will give us some cover at dummy half as Jack Lee requires surgery on a torn ligament in his lower bicep.”