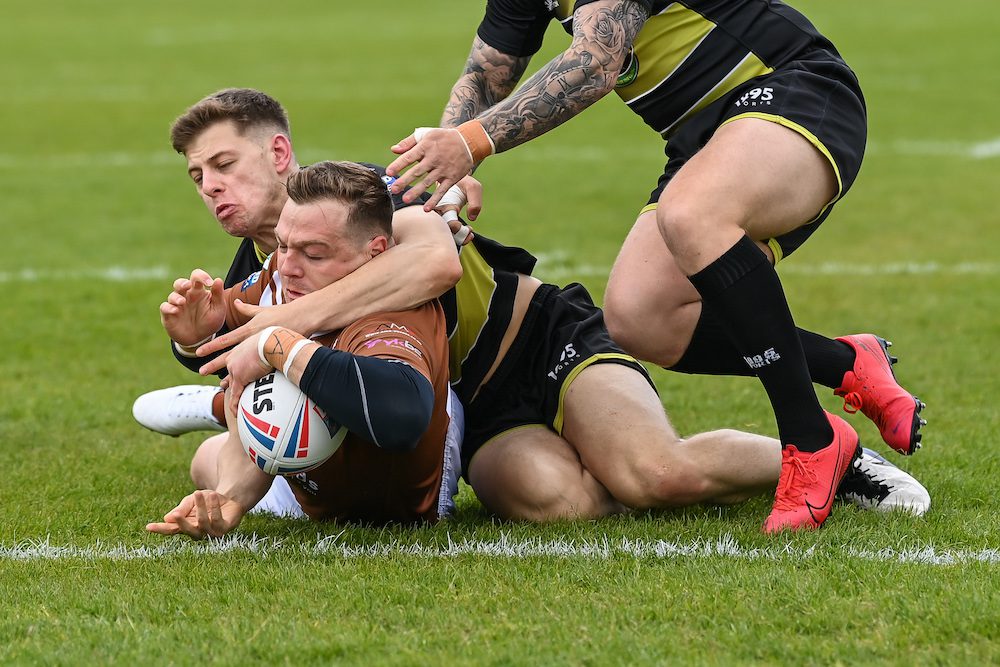 Kiedan Hartley’s brace of tries saw Hunslet home yesterday (15 May 2021) on the North Wales coast to register their first points of the season.

The Parksiders got off to a flyer when good passing sent Tom Ashton over in the left hand corner. Brambani converted and Hunslet lead 0-6 after only 3 minutes.

But Hunslet were changeable (much like the weather) and became the orchestrators of their own downfall. Not doing the simple things correctly meant possession and momentum were handed to the home team in the form of soft penalties.

A controversial try on 12 minutes levelled things up when Cam Brown acrobatically touched down from a neat kick, although it was tight as to whether the ball went dead. The try counted though and now a good Crusaders side had the wind behind them.

After three sets of tackles on Hunslet’s line the defence broke and Eckley powered his way over, Billsborough converted to give the hosts a 12-6 lead.

But the game swung like a pendulum and after being held up over the line Hunslet eventually managed to force a try. Repeated sets ended with the Crusaders’ defence being unable to stop Sion Jones, and with the conversion successful we were all square at 12-12.

In the friendly played at the South Leeds Stadium last month Hunslet scored nearly all their tries in the last five minutes of each half and they ended this half strongly too. A great passing movement out to the right pulled the defence across before George Senior (on loan from Batley) slipped an inside ball for Hartley to score. Conversion added and Hunslet lead at the break 12-18.

The day had been fairly fine up to now on the Welsh coast, but as soon as the half time hooter went the heavens opened and a torrential shower came down bringing thoughts of a dour sticky second half, but the rain stopped as the game restarted and it was the hosts who struck first.

Hunslet were on the attack but tried one pass too many, and from the dropped ball Gav Rodden scooped up the free gift to race 50 yards to score. 18-18.

It was a curious thing in this game that no one seemed to be able field the ball from a kick off, and the same happened again as Hunslet found touch and Nathan Conroy went close to nudging Hunslet back in the lead.

The Parksiders had some defending to do as giant winger Patrick Ah Van had to be bundled into touch before scoring, but on 65 minutes Hunslet edged in front when Brambani converted a penalty after North Wales had strayed offside.

From the restart a brilliant 40/20 kick put Hunslet on the attack, and after a couple of sets knocking on the door an opportunity came when Simon Brown sent a great ball to Kieden Hartley who was too quick for the Crusaders defence. Brambani converted and Hunslet led 18-26 with 15 minutes to go.

Again the rain came down and tempers frayed. Kieden Hartley was sin-binned for a shoulder charge, before North Wales’s George Roby was sent off for an outrageous punch.

The hosts threw their all at the Hunslet defence and came close but at two scores behind it looked unlikely Hunslet would relinquish their lead. A Crusaders hack through from a grubber kick was booted dead by Brad Hey as the hooter went and so it was Hunslet that took the points on a happy journey back to West Yorkshire.

Batley loanees Wayne Reittie and George Senior had good matches in the threequarters, as did Lewis Wray at loose forward and Harry Kidd at prop, but this season is still a work in progress and Hunslet will have to cut out mistakes of their own doing if they are to beat Barrow and Keighley in their next two fixtures.