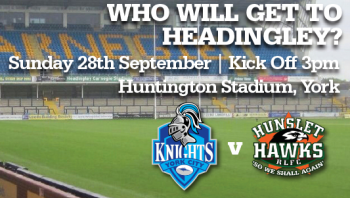 The Hawks who dispatched of Gateshead Thunder in the elimination play off will go into the game full of confidence, but knowing too well the size of the task in hand.

York who were defeated by Oldham in the qualifying playoff match will be looking to bounce straight back and reach the Grand Final at the second attempt. The City Knights have beaten the Hawks on three occasions already this season and will go into the game as favourites.

The club are asking all our supporters to make the short journey to the Huntington Stadium this Sunday to support the team in one final push towards a Grand Final appearance against Oldham Roughyeds at Headingley Carnegie Stadium on Sunday 5th October. Wear your Hunslet colours and be loud and proud, together we can make the Grand Final.

The club are running supporters coaches to the game, anyone wishing to book on can do so by calling Geoff Creswick on: 07738568650 The supporters coach leaves the Stadium 12:15pm. Price is £10 Adults, £5 kids.