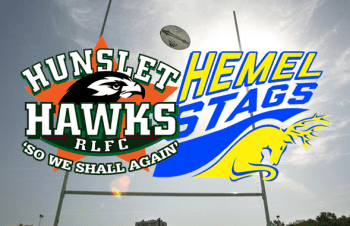 Hunslet Hawks can today announce that they have entered into a partnership agreement with Kingstone Press League One club Hemel Stags for the 2015 season.

The partnership will enable several of the Hawks 2015 Championship squad to be dual registered with the Stags and made available to Troy Perkins for selection for the Stags.

Director of Rugby Darren Williams welcomed the agreement “I have been in discussion with Troy for a couple of months now and muted this idea back in November, we have had further talks and both agree that this will be of mutual benefit to both clubs.”

“A number of our players who find themselves not featuring in our first team will be made available to Troy for selection and it will be his decision as to who he decides to select.”

“We had a number of players on loan at Hemel last year and that worked out well for the players concerned and ensured they were match fit and ready to go when we required them.”

Stags Head Coach Troy Perkins added “I’m really excited to be forming this partnership with Hunslet. Like all clubs in the south we don’t have very big squad and with it being a long and challenging season it will be good opportunity to call on quality players from Hunslet which will add more depth to our squad.”

“We had a couple of Hunslet players on loan last season and they did well with us and came with the right attitude. I have full confidence in the squad I have put together however I feel that we are a bit light in a couple of positions.”

“It will also benefit Hunslet by giving some of their players much needed game time so they are match fit when they are called back into their match day squad.”