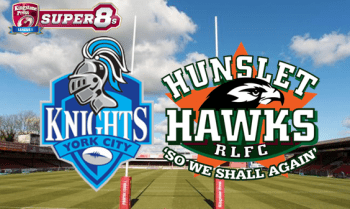 The Hawks have been dealt a huge blow with the news that Club captain Simon Brown (Hand) and Lewis Reed (Dead leg) have both been ruled out of the game. Marcus Elliott and Danny Thomas come into the squad.

The Hawks travel to Bootham Crescent, with the squad down to its last fit 19 players. The Hawks know anything less than a win will probably put an end to any hopes of reaching the playoffs.