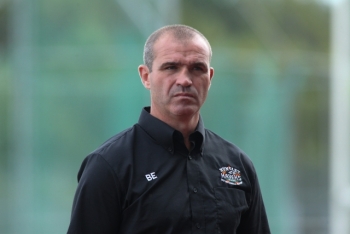 HUNSLET HAWKS coach Barry Eaton admits their start to the 2015 season, after promotion back into the Championship, is as “tough as it gets.”

The fixtures were revealed last night and Hunslet – having beaten Oldham in the Championship One Grand Final – face an ominous opener at Featherstone Rovers on Sunday February 15.

Their West Yorkshire rivals, of course, reached the Grand Final earlier this month where they fell against Leigh Centurions, but are hoping to reach Super League now promotion and relegation has returned.

“It’s going to be an exciting game to start with,” admitted Eaton. “It’s a local derby – there’s quite a few of those for us next year – and we’re looking forward to it already.

“It’s certainly as tough a start as you can get, away from home at Featherstone, who have just played in the Grand Final this year and will be one of the favourites to be in that mix for top four spots come the end.

“It will be a difficult challenge but a good early test.”

A week later Hunslet host Batley Bulldogs and then Dewsbury Rams as the derbies come thick and fast before heading to the home of three-times World Club Challenge champions Bradford Bulls on Sunday March 8.

Eaton said: “Crikey, who’d have thought this time 12 months ago that Hunslet would now be talking about playing a league fixture against Bradford Bulls?

“That’s going to be a brilliant prospect, too. Obviously Bradford have had their problems with relegation and the like.

“They’ve been through some disruption but they look like they are finally back on their feet now.

“Without doubt, it’ll be the biggest game in the calendar for most Championship teams.”

Season Tickets & I Am Hunslet memberships our now available. Click here to join the action.