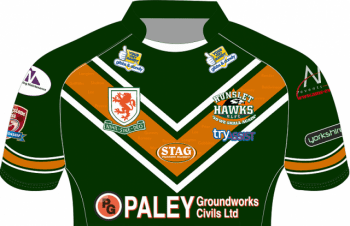 Hunslet Hawks are tonight delighted to reveal the home and away playing kits for 2015.

2015 will mark the 50 year anniversary of the 1965 Challenge Cup final when Hunslet played Wigan in what is still regarded as one of the greatest ever challenge cup finals.

To commemorate that historic occasion, the club and our official kit manufacturers Stag have been working closely to come up with a design that would be based on the playing strip worn by the 1965 side that graced Wembley that day. The design will see the Hawks moving from the traditional myrtle white and flame band to a chevron design on the home kit.

The main feature of the retro design will feature images from the cup final which will be sublimated on both the front and backs of the playing shirts. The playing shirts will also feature the Hunslet Lion badge, the same badge which was on the Hunslet kit in 1965. The surnames of all the 1965 squad will be sublimated on to the chevron of both shirts.

Marketing & Media Director Gareth Evans said “The club is delighted to recognise the team of 1965 by designing our 2015 kits on the kit they wore at Wembley. We are committed to celebrating the heritage of our great club and we hope that our supporters will back us by purchasing our 2015 kits. This is a real chance for everyone to purchase a piece of history and celebrate the achievements of the 1965 squad. I’d like to thank Graham and Neil at Stag for their support in this process and all our new and existing commercial partners for their support in 2015.”