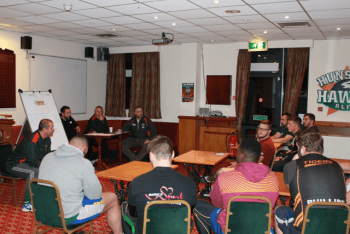 The new look Hawks squad was at the South Leeds Stadium last night as they kicked of their 2015 pre-season. The new squad which totals over 30 players compromising off 14 new signings and 2 trialists, got together for the first time yesterday evening as pre-season training commenced.

The squad first attended a team meeting in the Phoenix suite where the players were welcomed by Barry Eaton and his staff including new Assistant Coach Matt Bramald. The coaches then spoke to the players and outlined the clubs plan for pre-season and set the expectations in terms of what levels would needed to be reached during this period.

The newbie’s of the squad then had to stand up and introduce themselves, a daunting task on your first day at a new club but a great way to break the ice and become a part of the Hunslet Family. The new players including Jack Lee, Vinny Finnigan and Callum Casey then had their individual player images taken in the new pre season kit, which the Hawks will play in during pre season.

The full squad was then taken out on to the training field to really start to get stuck into what will be a tough pre-season as we prepare take on clubs operating full time squads in the Championship. The lads went through a rigorous testing programme to monitor fitness levels on their return before being put through their paces.

Barry Eaton said “It was great to back together as a group again, there has been a huge turnover in terms of the playing staff and it’s really important that we get the new lads integrated quickly and bought into the clubs ethos. The lads have turned up in good condition, but there is going to be alot of hard work put in both on and off the field building up to our first pre-season game at Featherstone on the 4th of January.”