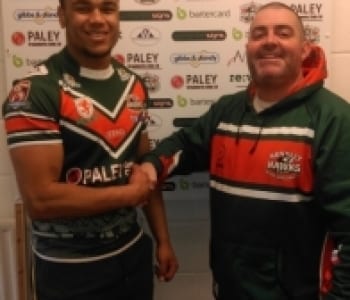 Martin graduated through the Castleford Tigers youth system and spent 5 years at the club. He finished the 2014 season playing Rugby Union for Huddersfield following a short stay at Batley Bulldogs.

Director of Rugby Darren Williams said “Charlie impressed for Bradford Bulls in Jamie Peacocks testimonial game at Headingley back in January whilst on trial at the club, enough so that Bulls head coach James Lowes wanted to sign him permanently but unfortunately for Charlie a deal couldn’t be agreed. James has spoken very highly of Charlie and with a busy period coming up and with a couple of long term injuries we decided to step in and offer him a deal until the end of the season. He comes here with a point to prove and his hunger to succeed has really impressed us.”

Martin added “I’m really grateful to Darren & Barry for giving me this opportunity at Hunslet to get back playing rugby. It’s an exciting challenge ahead for me and I’m ready to do my best for the club and prove a few people wrong.”