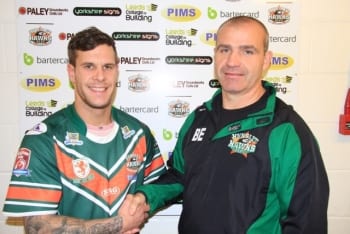 Hunslet Hawks RLFC are delighted to announce that the club have signed half back Andy Kain from Featherstone Rovers on a 2 year contract.

Kain 29 joined Featherstone Rovers from Widnes on loan in 2007, a deal which was then made permanent in 2008. He has scored over 100 tries for Featherstone in his career at the club and his signing is a tremendous boost as the club look to consolidate in the Championship following promotion in 2014.

Kain made 26 appearances for Rovers in 2014 scoring 12 tries and was a losing Grand Finalist as Leigh Centurions took the spoils the same day the Hawks won promotion via Golden point extra time. He was under contract with the Featherstone club for 2015 but both parties have agreed a release.

Director of Rugby Darren Williams said “The signing of Andy on a 2 year contract is a real statement of intent from the club, for us to attract such a high calibre playmaker is a real shot in the arm for the club and shows the ambition we have to not only survive as the toughest ever Championship season approaches but to look to push on and consolidate our position.”

“This club has made huge strides over the last few years and to entice a player of Andy’s qualities to join us says a lot about our standing now in the game. I would personally like to thank Mark Campbell who as in the George Flanagan move has been very accommodating in facilitating this move, Andy has been a tremendous servant to Featherstone and leaves the club on good terms and were thrilled to add him to our 2015 squad.”

Andy will be sponsored by Fred & Jane Hopkins for 2015.

Meanwhile the club can confirm that the pre season game at Featherstone arranged for 4th January for the annual Gareth Swift memorial trophy has been postponed due to the condition of the pitch at The Big Fellas Stadium, both clubs are looking to re-arrange the fixture although the game cannot simply be reversed due to the unavailability of South Leeds stadium.

Finally the club shop will be open all week and until 8pm tonight & Thursday evening for anyone wishing to renew or purchase season tickets/memberships we also have a wide range of new winter merchandise in stock as well as festive Hawks calendars & Xmas cards amongst other gift ideas.