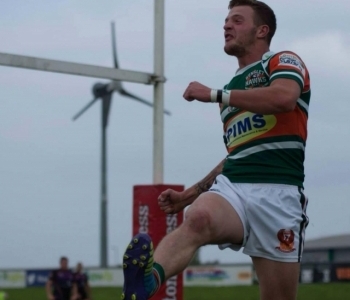 Hunslet Hawks are 80 minutes away from the Kingstone Press Championship One Grand Final and the chance of promotion to the Championship when they take on York City Knights this Sunday at Huntington Stadium (3.00pm).

Hawks full-back Jimmy Watson is one of the club’s top try-scorers this season and has been in fine form going into this game. Watson believes the effort in training and shift to a play-off mentality can get them into the final against Oldham.

“The Gateshead match went exactly how we wanted it to. Bouncing back quickly after the set back against Oldham is how we wanted to respond,” said Watson.

“It’s going to be a big week in training getting ready for York. Barry Eaton is a great coach and we’ve got a cracking bunch of lads here who just want to get stuck in.

“We all come out of the Gateshead game with no injuries so Barry has got a full squad to choose from this week.”

Watson is aware of the Hawks two defeats to York this season but when it comes to play-off Rugby League the regular season is forgotten about.

“It was disappointing not to get a win against them in the season but that’s finished with now. The play-offs are different and we’ll be putting past performances aside,” he said. “Barry has put a plan together so we can fully focus on our individual jobs.

“York are a quality side who have got real talent all over the field. Oldham went there and give it everything they had and got a result. Now it’s up to us to do the same.

“I’ve got a few friends in the York squad. We keep in touch and usually have a chat before our games. They’re an enthusiastic bunch who’ll be looking to score a few and get past me. We’ll be looking to match them and keep them out.”

Tickets for the Kingstone Press Championship One semi-final play-off, York City Knights v Hunslet Hawks at Huntington Stadium on Sunday September 28 (3.00pm) can be purchased on the day from as little as £15 for adults, £12 for concessions and £6 for children (under-16).