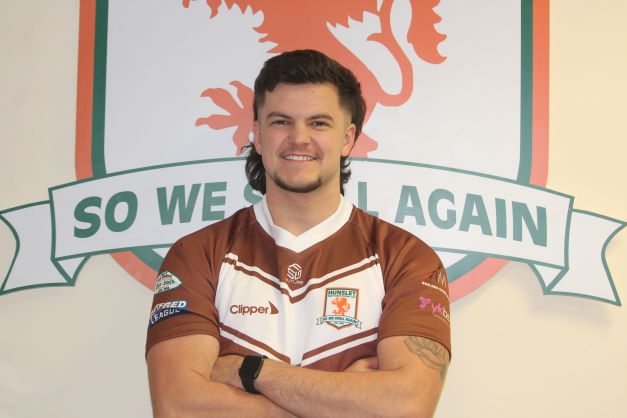 Rowland Kaye, at only 22, has a wealth of priceless experience behind him.

The Welshman, who was born in Bridgend and who was nurtured by the Blue Bulls local amateur outfit, subsequently gravitated to the vibrant South West universities Rugby League scene and, later, to West Wales Raiders.

He has joined Hunslet from the Raiders, and fans will recall his huge effort for the seriously depleted side in their recent heavy defeat at the South Leeds Stadium – a personal display that seems to have caught the eye of discerning Parksiders head coach Alan Kilshaw.

Kaye, a second row forward, started that match on the wing in the wake of West Wales’ crisis and recalls: “I had a good game – at least Alan Kilshaw seemed to think so.

“He came over to me on the final hooter, shook my hand and commended me on my performance. I thought that was a nice thing to do and watched him for a minute or so; he didn’t seem to do the same with all our players so it did feel as though he was making a particular point.“When he formally approached me I got in touch with Joe McClean, who had joined us at West Wales from Hunslet on a one-match loan deal, when we drew with Doncaster. Joe couldn’t speak too highly of the club, and I’m delighted to have signed on a one-year deal.

“Killer said he was building a young side and I’m excited about being part of it. I think I can bring plenty of experience to the cause, including a spell with French outfit Carcassonne that I thoroughly enjoyed. I’m buzzing about being here and I’m really looking forward to the new season.”

Kilshaw said: “Rowland first came to my attention when I was previewing West Wales before our fixture at the back end of the season.

“He was always a standout for them, in a well-beaten team. His efforts, and work off the ball, were really noticeable.

“I spoke with his former Raiders coach Kim Williams, who couldn’t praise him enough.”

He added: “The fact that he’s prepared to move from his home country for an opportunity with us shows his intent and I’m sure he will be a fans’ favourite.

“He’s a great size and can play equally well in the centre or back row. Although this signing doesn’t align with our local talent philosophy the fact that Rowland is prepared to make the move shows great commitment and I hope we can all adopt him as one of our own next season!”

Rowland Kaye is, in fact, only the latest of a long list of men from Wales to join Hunslet, dating back to the Northern Union era. And he will no doubt shortly emulate them by bringing the traditional Welsh talent for singing to the club’s famous song `We Swept the Seas Before Boys, and So We Shall Again’.