Hoody heads off to the Red Devils 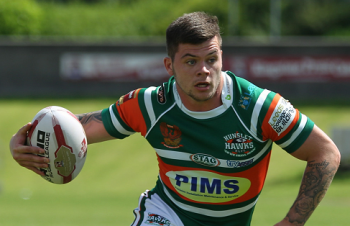 Hunslet Hawks can today confirm that we have reached an agreement with Salford Red Devils for the transfer of Liam Hood.

The deal will see a transfer fee paid to the club as well as a Salford 1st team player (to be agreed by both clubs) joining the Hawks on a season long loan for the 2015 season.

Liam 22, originally joined the club on dual registration from Leeds Rhinos in 2013, where he had a successful first season, making 19 appearances and scoring 5 tries in his first stint at the South Leeds Stadium.

After a brief spell away from the game for personal reasons, Liam rejoined the Hawks on a permanent basis in 2014 and has since excelled for the club in the hooker role, scoring 8 tries in 12 appearances this season.

‘Hoody’ as he is known amongst the clubs loyal supporters will be looking to sign off with the Hawks with a Grand Final win before moving on to test himself once again at the highest level of the sport with the Red Devils.

Director of Rugby, Darren Williams commented ”Whilst obviously disappointed in losing such a key player who was part of our planning for 2015, it’s a tremendous opportunity for Liam to get back into a full time environment and join such an exciting squad of players at Salford.”

“It’s great to see Super League clubs like the Red Devils giving young English talent an opportunity to prove themselves at the highest level and Liam goes with the clubs best wishes.”

“We’re proud to have aided his development to get back to the top level of Rugby League in the UK and when we sell Hunslet to young players with ambition we provide them with a stage to showcase their talents, and like Andy Yates last year he’s grabbed it with both hands.”