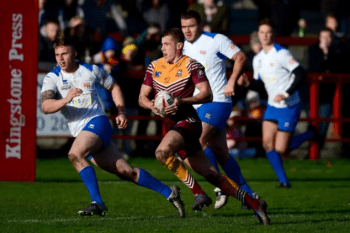 Hunslet RLFC are delighted to announce that we have signed Michael Hayward from Batley Bulldogs on a month’s loan deal.

Hayward 28, is a proven winger at Championship level having made 11 appearances for the Bulldogs this season scoring 6 tries. He joined Batley at the start of the 2016 season from Castleford Lock Lane following a spell in Italy playing Rugby Union. “Mikey” as he is known was named BARLA & Yorkshire international Player of the Year in 2015.

Director of Rugby Darren Williams said “Gary wanted to increase competition in our outside backs following Gavin Duffy’s departure due to work commitments.

“We have also just been informed that Marcus Webb has been selected to tour Australia in July with the Welsh Students so he will also be unavailable.

Williams added “We spoke to Michael at the end of the 2016 season but he decided to stay at Batley who gave him the opportunity to turn professional.

“This season he has been a regular fixture in their team until recently, having made 11 appearances scoring 6 tries.

“He’s athletic with pace to burn. He trained with us for the first time last evening and will come into consideration for this Sunday’s home game with York City Knights.”