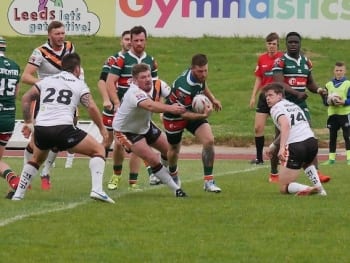 Dissapointed Coach Gary Thornton admits it was difficult to take any positives from Hunslet’s 52-20 home drubbing by York City Knights in Kingstone Press League One.

Hunslet trailed 36-0 at the break before salvaging some pride with four second-half tries, but Thornton felt that was little consolation as his team slipped to eighth in the table.

“The first half was atrocious, shocking, terrible,” he said of his first home game in charge.

“We started brightly enough – in the first 10 minutes we had a couple of chances, but we didn’t cross the line.

“If we had it might have been a different game, but we struggled to hold York’s tempo.

“They totally out-enthused us in the first half, or for 25 minutes of it.

“I was really disappointed. After the performance we put in up at Barrow I was reasonably optimistic, but it was an unrecognisable team.”

Of the second half“It was about going out and trying to restore some pride.

“We did score some tries, but it is difficult to look at the game as a whole and find too many positives. As players and a coaching staff we have got to be accountable for that and look to improve.”

Hunslet have no game this weekend before facing Toronto Wolfpack in Canada on Saturday, June 24.