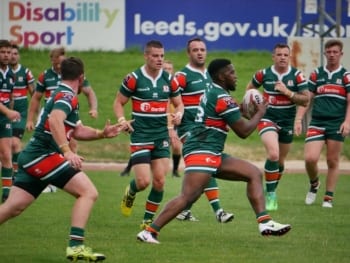 Young Prop Jose Kenga will have to prove his fitness after being injured in Hunslet’s 56-10 win over Coventry Bears in the Kingstone Press League One Shield.

The 22-year-old suffered a bang to the head, just five weeks after a similar injury in Hunslet’s defeat at Toronto Wolfpack.

“He will have to go through the proper return-to-play protocol.

“He has only played for me twice and been concussed both times.

“There didn’t look to be too much in it, he clashed heads and had to come off with a bloodied nose, but if you get two concussions in 12 months you have to see a specialist and go through rigorous tests, which is the right thing to do.”

Thornton added: “I felt for him because he was going well.

“He is a promising player. He is still young and he has got some potential.”

The win lifted Hunslet into top spot in the Shield table above North Wales Crusaders who were beaten by London Skolars.

“It was pretty comfortable in the end,” Thornton said.

“I was a bit disappointed with the first half.

“We weren’t great, but those teams always give you a game for 35-40 minutes.

“They come at you and they are difficult to break down, but fitness and quality told in the end.

“It was a good second-half performance and we blew them away.

“We conceded a couple of soft tries in the first half, but nilled them in the second which was pleasing.”