Hunslet hold on to cage the Bears 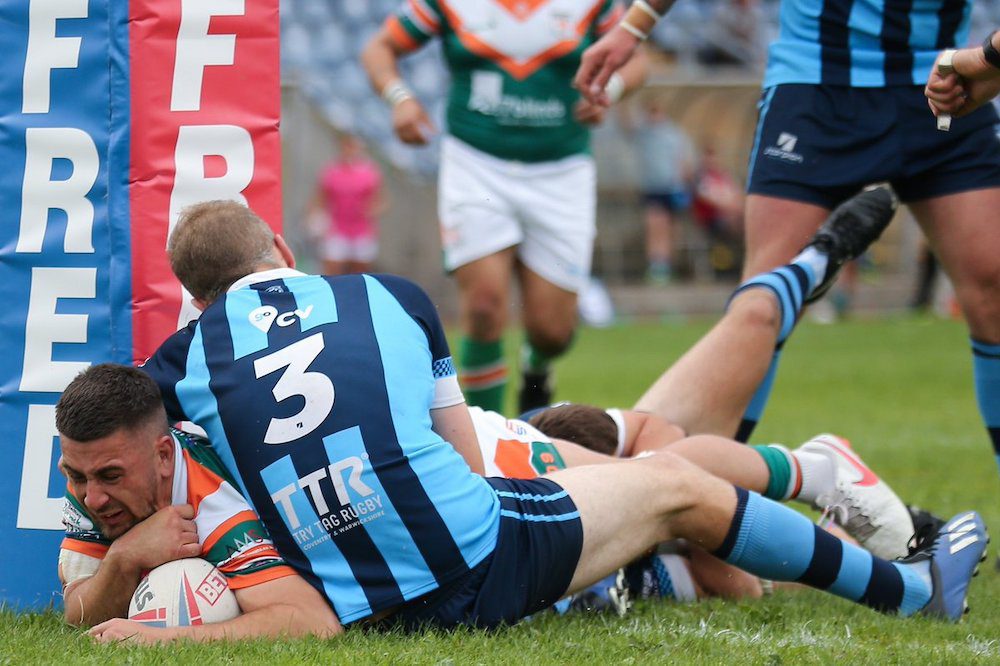 Hunslet held on for an important win (29 August 2021) at the South Leeds Stadium to boost their chances of a play-off place at the end of the Betfred League 1 Season.

Last week’s draw at Rochdale Hornets looked to have thrown a spanner in the works, but the Hornets lost to North Wales Crusaders yesterday meaning 2 from 3 Hunslet wins should see them secure.

It was a revenge mission after Coventry were victorious back in July at the Butts Park Arena, coming back from 22-44 down to win 46-44 in the last ten minutes.

The home side got off to the livelier start when on 8 minutes a Mikey Wood ball sent Harry Kidd through, who was too strong for the Bears defence, Brambani converted and Hunslet led 6-0.

Five minutes later and Hunslet threatened again, Dominic Brambani judged a cross field kick perfectly for Reece Chapman-Smith to pluck the ball from the air and stroll over the line. 10-0.

It looked easy for the Parksiders, but they dropped their guard on 18 minutes when Kieran Sherratt scored from a Peter Ryan ball and all of a sudden Coventry were back in it at 10-6.

The second quarter definitely belonged to the home side though as firstly Simon Brown’s reverse ball invited Jy-Mel Coleman to score on 22 minutes , before a lung busting Jordan Andrade run set up a platform for Hunslet to ship the ball out right and Lewis Young wrestled his way over on the 34th minute. 20-6

Captain Duane Straugheir ended the half on a high with a try after Lewis Young had a taken a difficult ball, and with Brambani’s conversion Hunslet led at the break 26-6 with nothing to worry about.

Coventry have taken a few scalps this season and came out in the second period a different team. Hunslet seemed to have stemmed the early pressure, but on 49 minutes ex-Hunslet man Liam Welham chalked a try in the corner and with conversion it was 26-12.

Hunslet have struggled this season when momentum shifts and again today they conceded less than 10 minutes later when quick passing to the right saw Sam Bowring pounce to reduce the deficit to 26-18.

The Parksiders seemed to have steadied the ship when after a good set of six Vila Halafihi found a gap in the Bears’ defence to score under the posts, 32-18 after 60 minutes and Hunslet looked to be on for a jitter free last quarter.

That would not be Hunslet this year though, and on 64 minutes they were harshly penalised for dragging a Bears man into touch. The following attacks were well defended before Matthew Welham seemed to find the line too easily. 32-24

Five minutes later and Coventry put a tricky kick up under the home posts, Dominic Brambani fielded it well but lost the ball in the following tackle and Coates touched down to give an easy conversion and reduce the score to 32-30.

Hunslet had lost the industrious Joe McClean, but with Rettie and Jones-Bishop looking safe in defence they had reason to believe they could hold out this week.

Although Coventry had their chances, so did Hunslet and even prop-forward Alex Rowe chipped in with a timely catch.

On the hooter Hunslet were attacking, and had looked solid for the last 10 minutes. This week they held on for the win, but they will know they need to put games to bed earlier if they really want to progress in the play-offs.