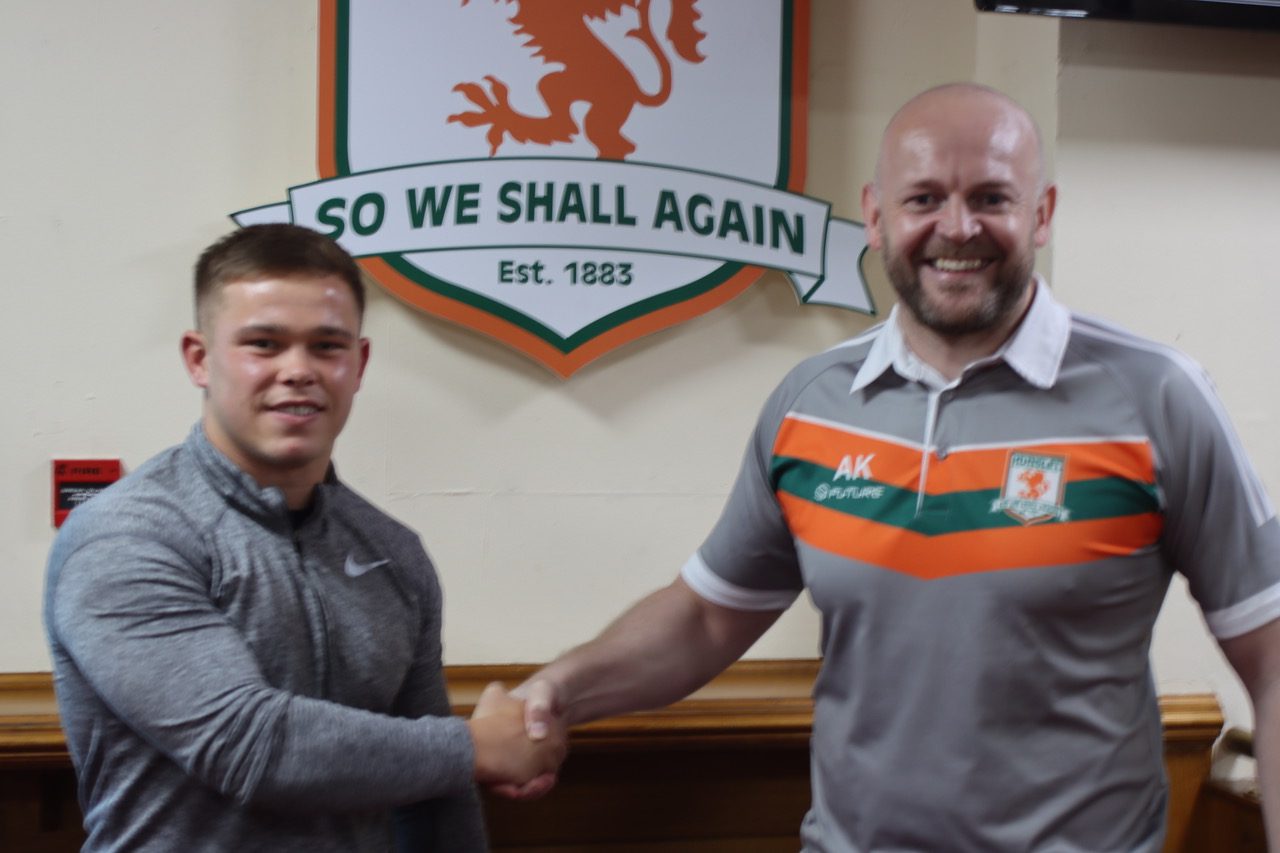 Young hooker Harvey Whiteley is delighted to have agreed a one-year contract at Hunslet. And the 23-year-old, who made a big impression at the South Leeds Stadium after being snapped up last August, aims to build on that early progress and further endear himself to the Parksiders’ loyal fanbase.

He said: “I had no hesitation at all in re-signing, and I’m keen to see how I can go after a good pre-season, with even more game-time under my belt. It’s good to be at Hunslet and an added factor which can only help is that I’m a local lad and only live down the road, at Woodlesford.

“I was over the moon when I got the call a couple of in August from head coach Alan Kilshaw. The lads, including the senior players, were very welcoming and they – and of course Alan – – helped me play better and I quickly felt very settled here.

“Training, and the build-ups to matches, was good and we really felt we should have pushed harder for promotion but ultimately two or three drawn games cost us – otherwise we would have finished much higher in the league and been much better placed in the Betfred League 1 promotion play-offs.

”Hunslet slipped out of those play-offs with a defeat at Doncaster in an elimination semi-final and are now aiming to rebuild for the 2022 campaign. Whiteley, who is likely to be a key figure in that process, said: “I’m looking forward to doing my best in front of our loyal and vocal fans, and to having my name on that shirt! It will be a good year, with a young and eager squad.”

Whiteley is a product of local outfit Oulton Raiders, for whom he starred in the National Conference League this year. His first taste of Rugby League was as a Raiders tot, under the late and sadly missed Rocky Whitehead, and he joined Leeds Rhinos Academy after catching the eye of the Headingley outfit, where he gained Super League experience and came under the wing of Rob Burrow.

“He was an excellent coach to our young lads, and a big influence on me,” reflects Whiteley. “Rob had the balance just right, he was ready to have a good laugh but he always knew just when to get serious and he taught me so much about what to do on the pitch – and he made sure that I always knew just why I was doing it. It’s very sad what’s happened to him; he means so much to all the players, who he nurtured so well.

“I’ve picked up a lot from all the coaches I’ve played under, including at Dewsbury Rams when I went there before returning to Oulton. I think it’s important that all Rugby League players never stop learning and I’ll be doing that until the end of my career.”