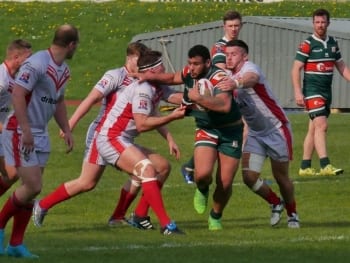 Luckless forward Brooke Broughton has suffered another injury blow just as he was beginning to find his best form after a long lay-off. Broughton has returned from an anterior cruciate ligament reconstruction, but sustained damage to his other knee in the 36-26 Kingstone Press League One win over North Wales Crusaders two days ago.

James Coyle said: “He was carried off and went straight to hospital for x-rays. We don’t know the extent yet, but I feel so sorry for him because he has really been improving and getting better and better.

“I am excited to see where he will get to.

“He has had a tough two years, but he has come back probably stronger than he has been for a long time.”

Coyle added: “Everybody [at the club] has got their fingers crossed that it is nothing major and he gets back to training and playing before the end of the year.”

Liam Mackay (ankle) and Jake Normington (shoulder) also picked up minor knocks at the weekend. Meanwhile, Coyle was delighted with the two points from the win over North Wales Crusaders, but unhappy at the performance that got them over the finish line.

He said: “It was a good win. North Wales are a decent team, but I was disappointed with the way we played.”