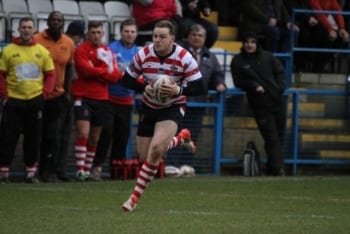 Tom, 24, is a hard running powerful centre than can also operate in the back row. He is a product of the Rugby Union system, coming through the Sale Sharks academy.

He signed for Sheffield Eagles in 2013, where he was voted Young Player of the Year. He was on the score sheet against Castleford Tigers in a Challenge Cup tie the following year.

He moved to Oldham in 2015 and played a key role in their 2015 promotion winning campaign. Ashton played in each of promoted Oldham’s first three games in the Championship in 2016, scoring the first of his side’s three tries at Leigh and then opening the scoring with the first of the Roughyeds’ seven tries in a 38-16 win against Dewsbury at Bower Fold.

Unfortunately his great start to the season was put on hold when he had to undergo an emergency operation in Salford Royal for the removal of a burst appendix. Following 14 weeks out he returned to full action and scored for Oldham away to Leigh centurions. His contract with Oldham was mutually terminated in June 2016 after another injury (Knee) put him out for the season.

Neil Kelly then moved to take him to Dewsbury in July of 2017.

Gary Thornton was happy with the signing of Tom “Tom will be a great addition to our squad.

“He’s a big powerful centre and can cover back row if needed. He will provide some attacking threat and strike out wide for us and give us another option to our attack.

“He’s got Championship experience with Sheffield, Oldham and Dewsbury, and has also played in a promotion winning team at Oldham, so he will bring some good experience to the group.”

Tom was delighted to have the chance to get his career back on track at the South Leeds Stadium “I am looking forward to a fresh start at an ambitious club.

“I am grateful to Gary for giving me the opportunity to join such a great club and I’m hoping to repay the faith he has showed in me with my performances on the pitch next season.

“I am a hardworking, hard running centre, and I am looking forward to getting on the pitch and showing the supporters what I can do.

“This is an exciting time to be joining Hunslet, and I’m looking forward to meeting the lads and getting stuck into pre-season.”