Hunslet land Leeming as Carbutt commits to the club 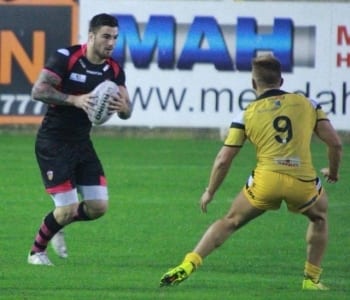 Hunslet RLFC are delighted to announce the signing of Cameron Leeming on a 12-month contract for the 2017 season.

Leeming 21 is a former Leeds Rhinos & Wakefield Trinity Wildcats centre or second row who had a year in Australia playing for Wyong Roos.

Cameron said “I am very happy to have signed at Hunslet for this season.

“All the players and the coaching staff have been really welcoming and i am looking forward to getting stuck in and having a big season in 2017.”

Director of Rugby Darren Williams said “Cameron was another casualty of Super League clubs having to make an early decision on a player’s ability at just 19.

“He spent a year in Australia before returning home and joined Stanningley.

“He got in touch and we were instantly impressed with him to offer him a playing contract after just 2 weeks into pre-season.

“He adds to the core of Leeds based players looking for an opportunity in the game and we want Hunslet to be made up of local young talent.”

Williams also revealed that experienced prop forward Matt Carbutt has extended his stay at the club having recently signed a 12 month contract extension adding “Matt had a consistent year last season and although under new head coach James Coyle Matt may well play a slightly different role in 2017.

“He is the ideal role model to help create the kind of culture we want at this club and will help the likes of Nyle Flynn adopt to senior rugby.”

On signing Carbutt said “I’m really happy to have signed again at Hunslet for another year.

“There a great set of blokes in the squad to play with. It was never a case of who I would sign for, i just needed to decide if I could go around again for another season.

“I’m excited for the new season ahead and working with James Coyle & Steve Deakin and seeing how far we can go as a squad.”