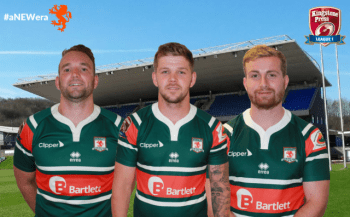 Hunslet RLFC are delighted to announce that prop forward Matt Nicholson, half back Shaun Roberts and trialist Niall Walker have all signed contracts with the club until the end of the season.

Nicholson 25 is a vastly experienced and well respected front row forward who is a former Leeds Rhinos junior and has also had spells at York City Knights, Featherstone Rovers and most recently Doncaster.

Roberts 24 is a half back who was recently on trial at York City Knights and was previously with Sheffield Eagles for 3 years.

Walker 20 is a utility back who scored a try as a trialist on his debut in the defeat at Oxford before sustaining a knee injury and is currently undergoing rehabilitation.

Head Coach Gary Thornton said “I’m delighted to have Matty on board. I’ve worked with him previously at both York and Doncaster, and he is a quality player and a quality individual.

“H has had a horrendous time with injuries which has hampered the progress of his career, but he is good to go now having fully recovered from his latest injury, and is looking forward to pulling on the Hunslet jersey.

“To have him on board for the rest of the season will be a massive boost to us. He is very professional and will bring a fantastic attitude and experience to the group.”

“He is a talented half back, tough defender with a great kicking game and organisational skills.

“Shaun hails from Doncaster, having played for both Moorends and Toll Bar, and was on my radar whilst I was coaching Doncaster, being recommended by the backroom coaching staff there.

“He spent 3 seasons at Sheffield Eagles, but wasn’t able to force his way into the first team due the presence of quality half backs like Kyle Briggs and Dom Brambani, but he gained valuable experience training in a good environment with those type of players, and will be a fantastic addition to our squad.

“He has big ambitions, a fantastic attitude, and is determined to play at the highest level he can, and I’m glad to be able to give him that opportunity with Hunslet. I am really looking forward to working with him and seeing the value he can add to our squad.”

Meanwhile hooker Matthew Tebb has been released to allow him to return back to Shaw Cross Sharks.