Hunslet RLFC swoop to sign experienced Championship half back 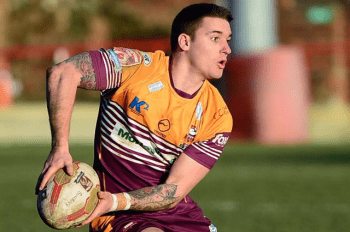 Hunslet RLFC have boosted their squad for 2018 with the signing of Batley Bulldogs half back Cain Southernwood.

Cain, 25, has signed a 12-month deal with the Parksiders and is Gary Thornton’s second signing in as many weeks as he looks to bolster his squad for 2018.

Cain, who is the son of former Hunslet player Graham Southernwood, has a wealth of experience at Championship level having played 100+ games for both Whitehaven and Batley Bulldogs scoring over 280 points during that time. He is a product of the Wakefield Trinity academy system and made his Super League debut for Bradford Bulls in 2010 after joining them on an initial 3 year deal.

Head Coach Gary Thornton was delighted to get his man; “This is a major coup for us, to have signed a player with Cain’s quality and experience.

“We’ve fought off a couple of Championship clubs and other League 1 clubs to get his signature, and I’m delighted he has chosen us.

“We’ve been trying to get the deal done as soon as we were alerted of his availability, and to finally get him over the line is fantastic news.

Thronton added “He has been at some very good clubs during his career, moving from Wakefield to Bradford and making his Super League debut as an 18 year old.

“He’s still a young man at 25, but has already built up a wealth of experience at Super League and Championship level with Whitehaven and Batley, playing a pivotal role at all those clubs.

“He is a tactically astute half back with a great kicking game, and terrific leadership qualities, which will be a huge help to our younger players and develop them further to fulfil their potential.

“This is another piece in our jigsaw as we build for next season, and hopefully this demonstrates our intentions for 2018.

“I’m sure the fans will welcome him, and he will soon become a big favourite, as he follows in his dads (Graham Southernwood) footsteps playing for our great club.

Cain commented “I am really excited to be joining Hunslet. It will be a new challenge for me dropping down into League 1 next season but one I’m relishing.”

“I can’t wait to meet the staff and players when we report back for pre-season and I’m hoping we can achieve something special next season as a group.

“My dad (Graham Southernwood) played at Hunslet back in the 90’s and had nothing but positive things to say about the club and the supporters and when the opportunity came up to join, it was a no brainer.”