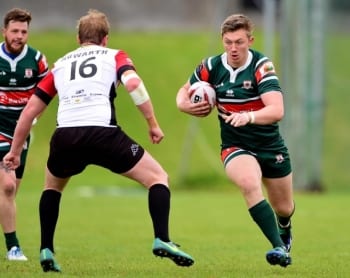 Hunslet RLFC can today announce that talented young forward Nyle Flynn has signed a new 12-month contract keeping him at the South Leeds Stadium for the 2018 season.

Flynn, 20 joined the club from Leeds Rhinos in November 2016 and has gone on to have a great debut season for the club culminating with him picking up three awards at last weeks end of season awards evening including ‘Top Tackler’ and ‘Most improved Player’ of the Year awards. Nyle was also voted in 2nd place by his team mates in the ‘Players Player of the Year’ award, a great achievement for someone so young in his first season at first team level.

Nyle, who is the son of former Dewsbury Rams winger Adrian, made a total of 22 appearances for the club in his debut season scoring 3 tries.

Head Coach Gary Thornton was delighted to retain Nyle; “I’m absolutely delighted to have regained Nyle’s signing. He has had a terrific first season following his move from Leeds Rhinos Academy, and thoroughly deserved awards he picked up last week.

“He got better as the season went on and we targeted him early on as one to keep for the future.”

Gary added “It’s really important we retain our young talented players and build our squad around them, and Nyle has certainly deserved his new contract.

“He is a quiet character but a tough competitor, and gets on with his job without any fuss.

“I feel he will develop and improve even further next season following this seasons experience, and I’m confident will be a huge asset to us.

“We continue to build for next season and re-signing Nyle helps create some stability in the squad.”

Nyle commented “I’m really pleased to have signed another year at Hunslet. I have enjoyed my first season here, even though it hasn’t been the best season in terms of where we finished.

“As a group we are looking for a more successful year in 2018 and we are aiming to finish higher up the table.

“On a personal note, I’m looking to get a big pre-season under my belt, with the aim of getting fitter and stronger for a big season ahead.

“I want to keep improving myself as a player, and I feel I can do that at Hunslet under Gary Thornton”