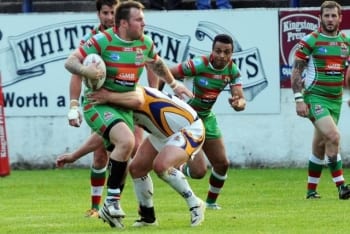 Hunslet RLFC can today announce the signing of Sean Hesketh from Keighley Cougars.

Sean has recently left the Cougars by mutual consent due to work commitments and Director of Rugby Darren Williams was delighted to land the front rower. “We tried to get Paddy to join us in the off season but he chose to stay loyal to the Cougars, however his work commitments have now changed and he’s been struggling to get over to Keighley for training.

“We currently have Lewis Reed, Michael Haley & Jack Coventry on the treatment table and we were looking a little light for middles.

“That’s why we moved to bring in Trae O Sullivan last week on loan from Batley Bulldogs.

“The addition of Sean will add a different dynamic to the squad and increase competition for places.

“When we get some bodies back we will have some real selection headaches for our front row options.”

Meanwhile Williams revealed that the club has this week released Omar Alrawi at his own request, as he can’t currently commit to the training requirements at semi professional level.

Williams added “Omar is returning to his community club Hunslet Club Parkside and we hope he has a successful season with them.”