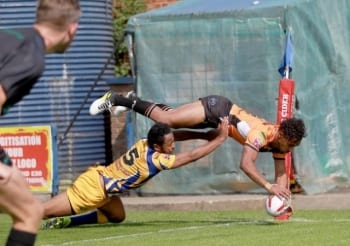 Dee, 21, is a product of the Warrington Wolves academy system and moved to Doncaster in 2016 from the Haliwell Jones Stadium to sign for the Dons after a successful three years in Warrington’s academy.

He signed for York in December 2016 and went on to have a superb season for the Knights in 2017, where he went on to finish his maiden season at Bootham Crescent with 15 tries from 19 appearances, including a memorable hat-trick at champions Toronto followed a week later by four against Hemel.

His prolific pace and a terrific try scoring record meant the club had to beat off competition from a host of Championship and Championship 1 clubs for the youngster’s signature and Gary Thornton was delighted with the capture of Dee; “Dee is a proven try scorer at League 1 level, and will be a fantastic addition to our squad.

“He finished top try scorer in a York side that made the playoff semi-finals, including a hat-trick against Toronto.

“He will bring some genuine pace and finishing prowess to our outside backs. Having worked with him at Doncaster, I know what he will bring to the group and am really looking forward to seeing him in a Hunslet shirt.

“He has a great work ethic to both training and playing and is always looking to learn and improve himself.

“Every time he takes the field he puts his heart and soul into playing, and he won’t leave anything out on the field, and I’m sure he will soon become a big favourite with the fans.”

Dee was equally excited about his move to the South Leeds Stadium; “I’m looking forward to the new challenge ahead and hopefully I can bring some more excitement and success to Hunslet.

“Gary is a great coach and he sold the vision he has for the club really well to me and I’m happy to be on board.

“The club have been very understanding of my work situation and I hope to repay them by putting my all into every aspect of my game.

“Having been the joint top try scorer last year at York, I hope to kick on from where I left off, and I’m looking forward linking up with the squad that Gary is putting together at Hunslet.

“Hunslet are somewhat known for the amazing support they get from their fans and It’s going to be a great feeling to be on the positive end of that kind of passion for the game.

“I can’t wait to get started.”