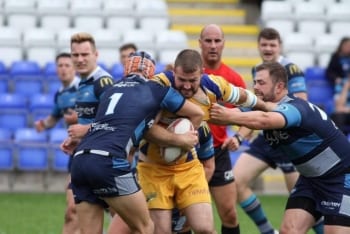 Sam, 31, is a product of the Huddersfield Giants academy system coming through the ranks at Brighouse Rangers. After a short spell in New Zealand playing for Petone Panthers, he moved on loan to Gateshead Thunder for the remainder of the 2009 season, making 9 appearances.

In 2010 Sam signed for Keighley Cougars, before moving back into the amateur game in 2011 signing for Underbank Rangers. He retired from the game in 2015 due to family commitments but was tempted out of retirement to join Hemel Stags a quarter of the way through last season. Sam went on to make 13 appearances for the Stags scoring a solitary try.

Gary Thornton was delighted with the capture of Jordan; “I’ve known Sam for a number of years now, and he has been unfortunate in the past not to progress his career as he would have hoped for.

“He started out at Huddersfield Giants as a junior, and has played at Gateshead Thunder, but came back into the professional ranks at Hemel last season after some time out of the game due to family commitments.

“He’s a tough, uncompromising front rower, and will be pushing very hard to establish himself in the squad.

“Sam has a terrific desire to make it at the highest level he can, and I know he will train the house down to get there.

“I’ve given him an opportunity to get back to his best, and I’m sure he will grasp it with both hands to make it a success.

“He never leaves anything out in the field and puts 100% into every game he plays.

“He’s also a great lad to have around and I’m sure he will soon become a big favourite in the group.

Sam was delighted to be given the opportunity to shine at the South Leeds Stadium; “I am really looking forward to my first season at such a great, well organised and well renowned club.

“It’s a fantastic opportunity for me and i intend on taking full advantage of it.

“I’m very grateful to Garry and the rest of the coaching staff for this chance.

“All the players seem decent lads and It will be good to get to know them all properly through what looks to be a tough but enjoyable pre-season.”