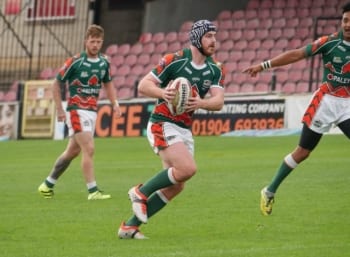 Hunslet RLFC are delighted to announce the signing of Prop Forward Jack Coventry from Featherstone Rovers.

Jack 22, has signed a 12-month contract with the South Leeds club and joins an ever growing group of existing players who have committed their future to the club.

Jack who is sponsored by Dawn Caley, initially joined the club on loan from Featherstone Rovers mid way through last season and made an instant impact helping the club to reach the Super 8s.

Jack is an uncompromising forward who’s go forward and defensive attributes really made him a favourite with the Hunslet faithful. He made a total of 10 appearances for the club in 2016 scoring a solitary try.

Director of Rugby Darren Williams said “As soon as Jack became available we moved swiftly to secure his services.”

“He came in on loan and made an instant impression, he is a model professional and his performances impressed.”

“He’s still young in his development for a middle unit and we think with a full pre-season and more games under his belt, he will flourish and continue to improve.”

Jack commented “I really enjoyed my time on loan at Hunslet, the players and the backroom staff made me feel so welcome, i knew straight away it was a good place to be.”

“The whole feeling around the club was great and the fans support, although small in numbers was immense.”

“I am hoping to play my part in the club pushing for promotion in 2017.”