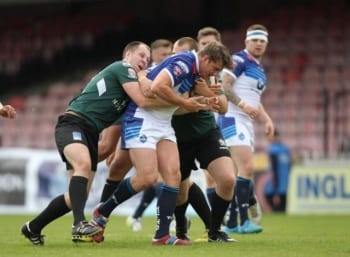 Ryan’s career was in the balance after he suffered a horrific leg break away to Newcastle Thunder in May 2016. The double fracture ruled him out of the game for 14 months. He announced his return to full fitness scoring a try for the Knights in their home victory against Hemel Stags back in July and went on to play a big part in the Knights success in the Super 8s as they reached the Play-off semi-final against Whitehaven.

Ryan, is Gary Thornton’s fifth signing of the off season as he looks to build a squad to challenge at the top end of the League 1 table and he was delighted with his latest recruit; “Ryan is a tough competitor and will add some toughness and experience to our pack.

“He has some utility value too as he is equally at home in the back and front row.

“I gave Ryan his first opportunity at professional level with York, and I’m really looking forward to working with him again.

“He suffered a long term injury after a bad leg break, but finished this season strongly in the playoffs with York, and is back fully fit and looking forward to a fresh start here at Hunslet.

“He’s a hardworking, honest player and a good person too, so will bring some great qualities to the group on and off the field.”

Ryan was delighted to get the opportunity to pull on the famous myrtle, flame and white jersey; “I would like to thank Gary and Hunslet for giving me this opportunity.  I’ve had 5 years at York and I leave there on great terms.

“It was nice to hear of interest from Gary. Gary and Darren really sold the club to me and it was evident from the start that they really wanted me to play for their club.

“Over the years I’ve been used to having Hunslet as close rivals and always enjoyed the fixtures against York. The Hunslet fans have good fun and always got behind their team and I’m looking forward to experiencing this as a Hunslet player now.

“The club was disappointed with their league position last season and have targeted a top 4 finish for next season, which is where this club needs to be.

“Gary is making some changes and wants to bring some good players as well as good people to the club.

“Hunslet have made some eye catching signings so far and I’m looking forward to getting to know my new team mates and also catch up with some old faces.”