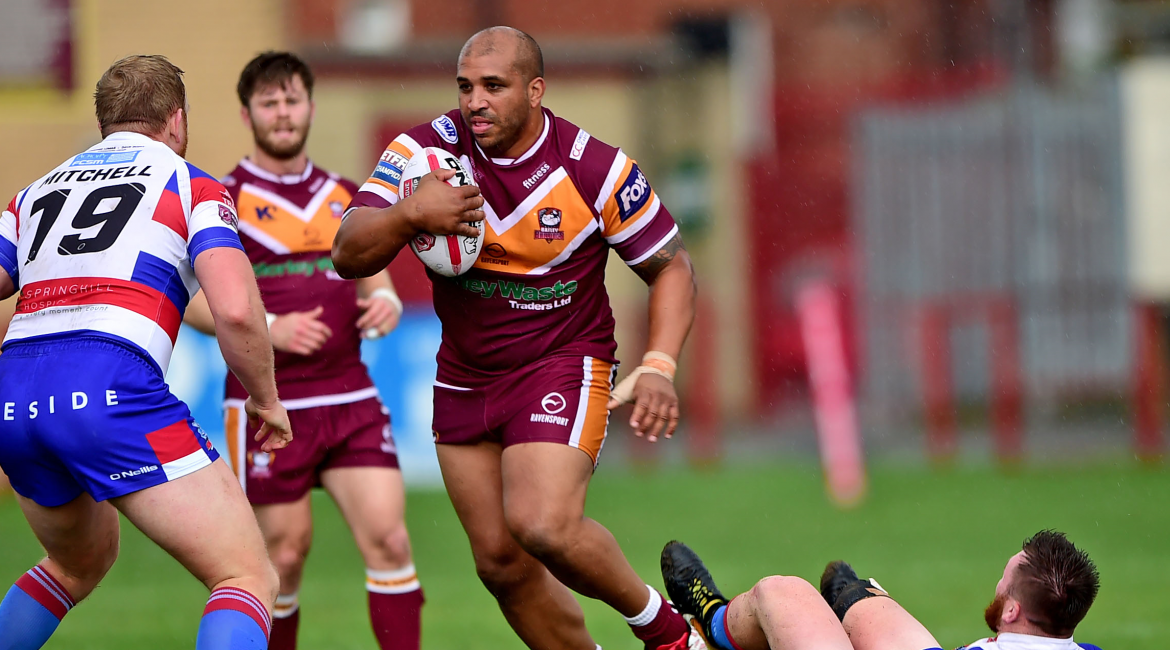 Hunslet, who are among the favourites to secure promotion from Betfred League 1, have announced yet another major signing in the capture of experienced prop forward Alex Rowe ahead of competition from several Championship outfits.

The 34-year-old Londoner, who starred with Newcastle Thunder last season after previous stints with London Broncos, Castleford Tigers, Doncaster, Sheffield Eagles and, from 2013-2018, Batley Bulldogs, has agreed a one-year deal with the Parksiders and revealed: “I came close to signing for Hunslet before the start of last season, it was just a matter of timing really that led to me join Newcastle Thunder instead – and a loan deal during the campaign only fell through at the last minute.

“I’ve had offers from a few Championship clubs but I had no hesitation in opting for Hunslet ahead of them. Part of the reason for me joining Hunslet was the feel-good factor around the club, while I live in Leeds and I’ve got a new job locally. And my wife was very keen on me signing up at the South Leeds Stadium!”

Rowe stressed: “I took very little persuading. I know Dom Brambini – who I was with at Castleford Tigers in our younger days, and who I also played with at Batley –  and Simon Brown, from Sheffield, very well and they both stressed how good it is at Hunslet, and how everyone is pushing together in the right direction.

“I’m delighted to be here. I’ve naturally spoken at length to Head Coach Gary Thornton, who is doing a fantastic job. I bring a lot of experience to the table, of course, but I’m not expecting, in my mid-thirties, to play every week and take someone else’s place. I’ve certainly got to earn my stripes, I’ve got to earn my spot and play well enough to hopefully keep it.”

Rowe has already bought into the high enthusiasm that is permeating the camp and reflected: “It feels like Hunslet are in for a special year and I plan to be part of that, especially as I’ve probably only got a year or two left in me.

“We’re targeting promotion, as is everyone else, and the first four games are likely to be crucial as we aim to set a platform for the rest of the season, with such as Barrow, Doncaster, Keighley, Newcastle and Workington also strengthening.

“So it’s likely to be an exciting year in League 1, with everyone striving to finish top and go up as of right. We’ll be bidding for that ourselves and, if we don’t quite make that, to at least be in the play-off mix.

“We came close to earning promotion last year but by all accounts it was largely a failure to close games down from winning positions that ultimately cost us. Players like Dom Brambani, Simon Brown and Danny Rowse can fix that, as we’ve shown in our pre-season wins over Batley Bulldogs and Bradford Bulls. We’ve got high expectations and I really do feel very enthusiastic, you can sense that positive things are happening at Hunslet.”

Thornton added: “It’s a massive boost for us to have a player of Alex’s experience and ability join us at this stage of the season. He’s a big robust prop forward and a handful for any defence.

“I’ve been in contact with him for a while, and we almost got him on loan last year until Newcastle pulled the plug on the deal, so I’m really pleased he has now signed following his release from the Thunder.

“He has loads of experience, mostly at Championship level, so he will complement our pack really well. He is well known and well respected in the Championship and League 1 and hopefully he can reproduce his destructive running and big defence for us in the coming campaign, and add to what is already a pretty formidable pack.”