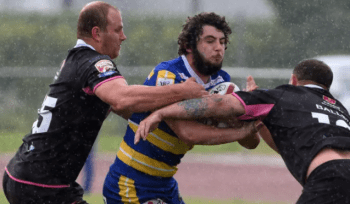 Hunslet RLFC are delighted to announce the signing of Jack Walton from Doncaster RLFC on a 1 year contract.

Walton 21 is a back row forward who previously played for Wakefield Trinity Wildcats & Castleford Tigers. He made 17 appearances for Doncaster last season, helping them to reach the playoff semi-finals.

Director of Rugby Darren Williams said “Jack cemented his place in the Doncaster squad last season and he is the calibre of player and person were looking to bring to the club.

“He is another player with age on his side. We are keen to develop a team and a culture with this young group as we embark on a new era here at Hunslet RLFC.

“Jack can play with ball in hand and we are looking forward to working with him and getting him integrated with the rest of the squad.”

Walton added “I’m really happy to have signed for a great club, after speaking to James Coyle & Darren Williams they really made my decision easy to join them.

“James is bringing in some new structures & wants to encourage us to play an exciting brand of football which suits my own game.

“It’s a new challenge for me personally to join a new group of lads but from my experience I know this group are a tight knit bunch and one that can stick together and I can’t wait to be a part of that.

“I’m looking forward to getting a good pre season under my belt and having a solid year and hopefully getting plenty of game time.”