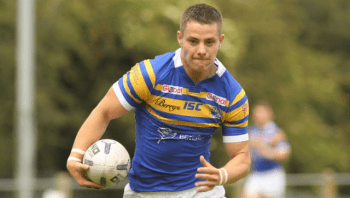 Hunslet RLFC are delighted to announce the signing of 19 year old goal kicking half back Joe Sanderson from Leeds Rhinos.

Sanderson, who is a product of Drighlington ARLFC signed for the Rhinos in 2013 and firmly established himself as first choice halfback in the Rhinos Academy team. Sanderson played a key role for the Rhinos Under 19’s in 2016 as they reached the Academy Semi Final before eventually losing out to Wigan Warriors.

Sanderson made 19 appearances in 2016 scoring 13 tries and kicking 102 goals with an 88% percent successful conversion rate.

Director of Rugby Darren Williams said “The signing of Joe is a real coup for the club. When Gary Hetherington (Leeds Rhinos CEO) made us aware of his availability we took a keen interest in monitoring his performances in 2016.

“It was clear that he was a real talent and myself and James quickly identified him as a player we wanted to bring to Hunslet.

“We have worked hard as a club to secure his signature to bring him to South Leeds and we are delighted to finally have him as a Hunslet player.

“In terms of his attributes, his goal & field kicking is exceptional and his support play & running game makes him a real threat with the ball. He can also score tries from anywhere on the park.

“It’s a great signing for the club following the signature of Nyle Flynn and just the type of player we are looking to attract to the club with age on their side to develop further.”

Joe commented “I’m really pleased to have signed for Hunslet. It’s obviously going to be a massive step up from being in the academy at Leeds to playing against men in League 1, but I’m really excited by the challenge.

“I’m looking forward meeting the boys and getting stuck in to pre-season. I hope with a solid pre-season under my belt i can then push on to get plenty of game time in 2017.

“It will be a big challenge for me but I’m ready to work hard and hopefully have a big year with Hunslet.”