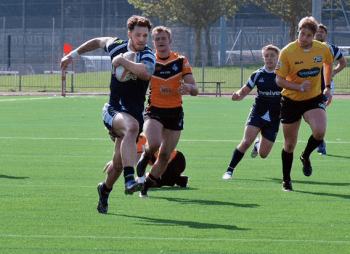 Hunslet RLFC are delighted to announce the signing of prolific try scoring outside back Jordan Gill from Oxford RL.

Jordan, 23, is a product of the Castleford Tigers academy system coming through the ranks at Lock Lane. He was selected for the England Academy training squad back in 2012 but injuries curtailed his development and he left in 2013.

After a stint in Rugby Union playing for Pontefract RUFC he moved back in to Rugby League signing for Oxford RL towards the end of 2016. He went on to score 4 tries in 5 appearances.

His form towards the end of the 2016 season earned him a 12-month contract and it didn’t take him long to get back in to his stride the following season, putting in a string of Man of the Match performances, notably in Oxford’s win over York City Knights where he grabbed a Hat-trick of tries and in his last home game for the club when he scored four tries in a victory over Coventry Bears.

The 6’3 tall flying winger went on to score an impressive 19 tries in 16 appearances finishing top try scorer for the club.

Gary Thornton was delighted with the capture of Jordan; “Jordan has joined us from Oxford, and is backing himself to establish his position in the team.

“He is a tall, rangy outside back with pace, and had a successful campaign last season for Oxford.

“He has come through the Castleford Tigers Academy system, and was a promising junior before injury curtailed his development.

“At well over 6’ tall he gives us a different dimension for our attacking options and will provide a real threat out on the edges.

“He’s a proven try scorer, and works hard out of exit for the team, so has the attributes we are looking for from our outside backs.

“I’m sure you will welcome Jordan into our ranks and he will be a great addition to our group.

Jordan was delighted to have signed a 12-month deal with the club; “I would like to thank Gary for giving an opportunity to play for such a great club.

“There’s massive history at the club and it’s an honour to be able to play here.

“I’m really looking forward to getting stuck in to pre-season with the lads. Gary is putting a good squad together this year and I’m sure we can have a great season.

“Playing for Oxford last season against Hunslet it was noticeable to see the great support Hunslet have and I can’t wait to play in front of these passionate Hunslet fans and show them what I’m capable of.”