Hunslet too hot for Skolars 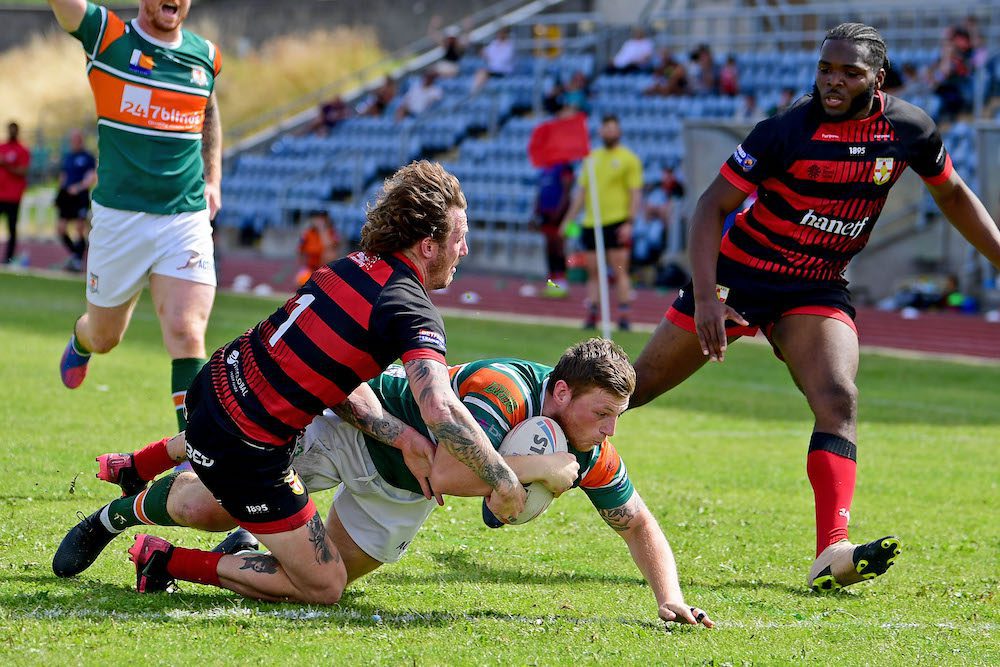 On another hot and humid day at the South Leeds Stadium (17 July 2022) Hunslet overcame a determined London Skolars to almost secure their place in this season’s Betfred League One play-offs.

But it wasn’t until the last quarter that the Parksiders took a real grip of the game, scoring some fine tries to end the tie in style.

The home side got off to a sluggish start, and mistakes gave London an early leg up. Jimmy Watson was in fine form and it was his good positional play that kept the scores level. But on 13 minutes the lively Phillip Lyon fed Harry Kaufman who stretched over for the Skolars to take the lead. 0-4

By the quarter mark Hunslet were coming into the game and had forced a drop out. But because of the heat the players stopped for a drinks break halting Hunslet’s momentum.

On 27 minutes though, a brilliant Matty Beharrell ball sent Jimmy Watson over to level up the scores, before Beharrell himself converted to edge Hunslet in front. 6-4

It was true Hunslet were now getting the decisions, but the Parksiders had their foot on the gas and Jacob Doyle was held short after good play by Olly Burton and Matty Beharrell.

On 35 minutes with the scores tight London broke and looked all on to score, but for a last ditch try saving tackle by Jordan Paga. If the match had a game breaker moment then this was it ,as moments later Matty Beharrell kicked a 40/20 from which good play sent Harvey Hallas over for a trademark try. 12-4

London’s restart went out on the full and Hunslet had time to add more points right on the hooter as Harvey Hallas flicked a lovely pass to Jordan Syme who was too strong. Beharrell converted and Hunslet led at the break 18-4.

Skolars could probably count themselves unlucky to go in at the break 18-4 down as they had been in the game until just before the break. They came out of the blocks quickly in the second period though and after Hunslet had knocked-on Jerome Yates scored, which with Thorman’s conversion narrowed the score to 18-10.

Hunslet’s returning captain Duane Straugheir had been looking strong until a re-occurrence of his arm injury meant he had to leave the field, closely followed by Jimmy Watson who pulled up after fielding a loose ball.

This meant Jordan Paga had to fill in at Full-back and on-loan forward Ross Peltier had to do the full 80 minutes. The Hunslet forwards in general putting in an extra shift.

Although Hunslet had chances (Jordan Paga came close but was adjudged to have been held short) it wasn’t until the 64th minute that the Parksiders secured the win. Matty Beharrell and Jordan Paga combining to send Joe Summers over under the posts to make the conversion simple. 24-10.

Now the home side hit the higher gears. Man of the Match Jacob Doyle got up for a Beharrell kick and spun round to score. 30-10

Although London hit back with a fine try created by excellent full back Jarred Bassett as he created space and fed Abevia McDonald who had the pace to score, it was Hunslet who finished strongest. Macauley Hallett making a break to feed Jordan Syme for his second of the afternoon followed by a cheeky Beharrell one pointer. 37-16

The best came on the hooter though as Paga and Doyle combined to send Beharrell under the posts to complete a personal haul of 19 points on his second game in the Myrtle, White and Flame.

43-16 at the hooter then and it was a good all round performance by the home side. Beherrall and Paga are combining really well and Jordan Syme is impressive moving the team around. Jack Render looked lively and Ross Peltier strong but Jacob Doyle picked up the Man of the Match for his strong running.

Coach Alan Kilshaw will hope the injuries to Straugheir and Watson aren’t too bad and will hope to see Rettie and O’Hanlon returning soon. But he knows he has a squad starting to hit form where he can count on players outside the first 17.