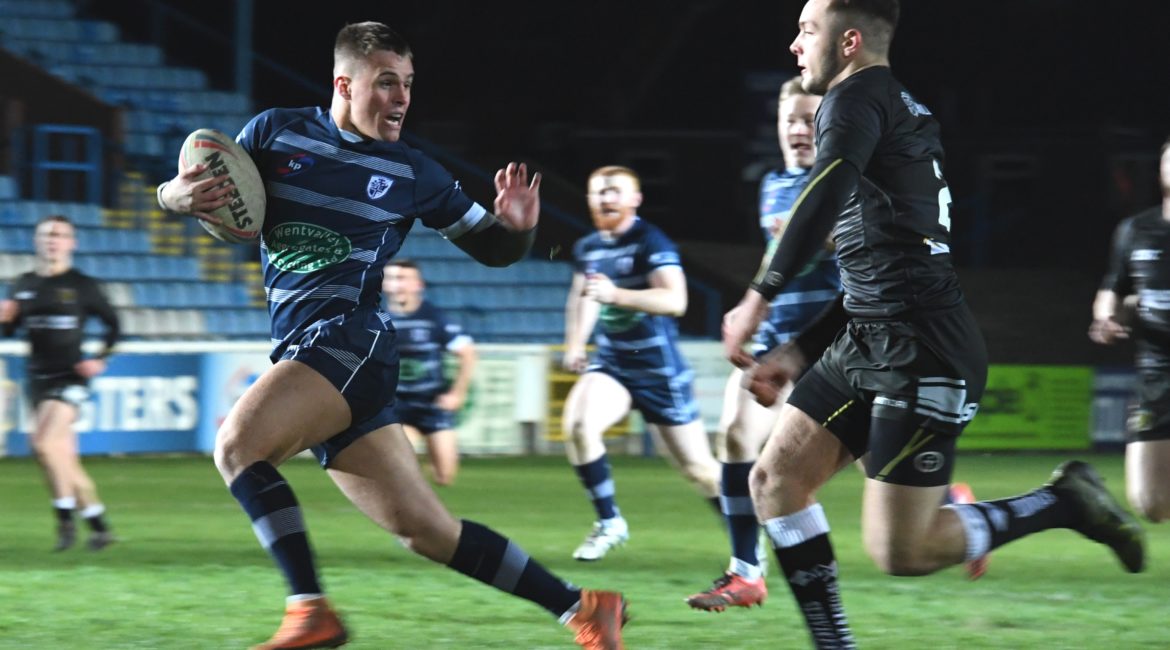 Kiedan Hartley, the quicksilver fullback who Hunslet have snapped up from Featherstone Rovers on a one-year deal, is determined to make the most of life at the South Leeds Stadium after having been largely overlooked at the LD Nutrition Stadium.

And the East Leeds product, who went on to spend four years at Leeds Rhinos Academy, is already eying up the Harry Jepson OBE Memorial Trophy game on Friday 31 January – when Hunslet host the Rhinos in a hugely attractive pre-season friendly – as a chance, if selected, to make his mark.

Hartley, 19, who is sponsored by Diamond Scaffolding Services (Yorkshire) Ltd, played in the 2018 clash and recalls: “It was a great occasion and I’d love to turn out for Hunslet in next season’s match. And with friendlies also arranged against Bradford Bulls and Batley Bulldogs lads like me, who are hungry to impress after being overlooked a bit elsewhere, will have plenty of opportunities to lay down claims for selection when the League 1 campaign kicks off in February.

“I see my strengths as having a bit of pace and having good feet. I’m a quick lad, I’ve been told I can be a bit of a handful, and I aim to come up with the goods.

“I just need the one chance, which I never really got at Featherstone.

“Head coach Gary Thornton has sold Hunslet to me really well and it’s great to be here.”

Thornton said: “Kiedan is an exciting young prospect, who came out of the Leeds Academy to play at Featherstone last season.

“His game time was rather limited due to the incoming coach’s utilisation of the dual registration system with Leeds, and playing Ashton Golding in front of him.

“I think this dampened Kiedan’s enthusiasm for the game a little but having met with him I convinced him he has so much to offer as a young player, with so much playing time in front of him – and not to be a victim of the dual registration system.”

Thornton enthused: “His attitude has been first class since he came in, and everyone – fellow players and coaches – has been so impressed with his lightning quick footwork, speed and agility.

“He can play in a number of outside back positions; he prefers fullback but he’s equally as comfortable at wing or centre.

“I think Kiedan will become a real fans’ favourite with his eye-catching pace and eye for a gap. He is one of a number of young, enthusiastic players we have this season that are chomping at the bit to make an impression.”